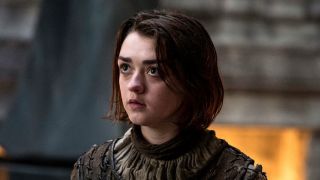 Arya Stark was back in fighting shape at the end of Game of Thrones season 6 but she still has some rough times ahead of her. If you thought she would have it easy just because she (season 6 spoiler warning) finally mastered both her assassin and blind swordfighting skills, you probably haven't been paying enough attention to the show.

"This year it really kind of heats up," Williams said. "Coming to the end of last season, the final episode, it really just felt like we were setting up for the finale.

"Everyone gets their trials and everyone get theirs tribulations. Particularly for Arya, there's some high points and there's some real low points too."

This is Arya's face when you tell her "it gets worse".

We'll still have to wait at least a few months to find out what Williams was talking about. The air date for the seventh season premiere could be June 25, according to an apparent leak on IMDB, so that's only… 131 days. Yep. Just 131 days.

Game of Thrones season 7 will debut this summer on HBO in the US and Sky Atlantic in the U.K.