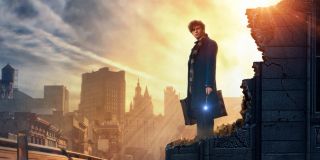 It didn't come as a huge shock to learn that we'd be getting more Fantastic Beasts and Where to Find Them movies. Four more in fact. Even though the first sequel isn't due to arrive for another two years, there's still the small matter of how they're going to be named. Will they simply tag a number on the end, like Fantastic Beasts And Where to Find Them 2? Or perhaps go for something a smidge more creative?

The folks over at SnitchSeeker filmed the cast at a recent Apple store event, during which Eddie Redmayne revealed how that problem has been settled. After throwing around a few amusing titles (Other Places to Find Fantastic Beasts, Fantastic Beasts and Whoops We Forgot One), the actor confirmed that they'll be a bit like the Harry Potter films.

"You know, I did actually ask that question to [director] David Yates and David Heyman yesterday. And the answer is: Fantastic Beasts will remain in the title if we go forward, and then it’ll be 'and the…'"

There you have it folks, straight from the wizard's mouth. The sequels will follow the same naming format as the main Potterverse flicks.