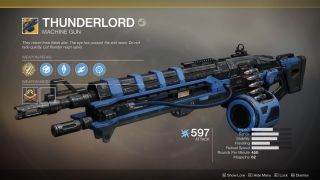 For longtime fans of guns that go DAKKA DAKKA DAKKA, one of the most baffling design decisions made during the jump from Destiny 1 to Destiny 2 was the abandonment of heavy machine guns. As far as I can tell, the sandbox designers couldn't find a way to balance these belt-fed murder factories in PvP and decided to do away with them altogether. Cue the community confusion as to why, not least in terms of lore, a whole archetype of guns no longer exists. Were they all stored in the tower when Ghaul blew it up?

Happily, that call has now been walked back, presumably as part of the shift in design philosophy that has also seen shotguns, snipers and fusion rifles let off the leash in PvP. Bungie confirmed that machine guns will be back in force when the Black Armory DLC lands in December as part of an annual pass update. But players can already get a taste of the incoming high-caliber carnage in the form of a new Exotic quest which awards a machine gun called Thunderlord.

Thunderlord is a returning weapon from Destiny 1, and was in fact the first Exotic ever revealed for the game, as part of its E3 gameplay debut in 2013. (This demo, coupled with datamined audio files and tips from a few known Destiny leakers, also recently led players on a riveting wild goose chase in search of Thunderlord's return.) Here's how you can snag this beast of a gun for yourself.

How to start the Thunderlord quest

To begin your quest, simply visit shipwright Amanda Holliday in the Tower. She'll give you an Exotic quest item called the Journal of the Reef Cryptarch which you must use to investigate the murder of Master Ives, the late Cryptarch of - you guessed it - the Reef.

Once you have the journal, you'll need to fill it with pages. These can be acquired by decrypting Legendary or Exotic engrams, or defeating Fallen majors and ultras in the European Dead Zone. Unless you've been hoarding Exotic engrams - or you want to splurge on engrams at the Cryptarch in the Tower - killing challenging Fallen is your best bet, so head to the EDZ and look for the Glimmer Mining Crew public event. It tends to appear in Trostland, The Sludge and near Firebase Hades. This event is absolutely stuffed with Fallen majors - so much so that you can fill the journal after a single wave of enemies if you get lucky. Plus you'll get a powerful gear drop when you get your last page.

We're one step closer to Thunderlord, folks. Now that Holliday's decrypted the journal pages you collected, it's time to clear out some lost sectors. You'll need to head to the EDZ and complete the Atrium, Terminus East, and Widow's Walk lost sectors. All three are located in the southeast corner of the EDZ in Trostland. You do need to loot their chests to get credit, but you don't need to clear them in any particular order. If you're having trouble finding them, consult this handy lost sector map from imgur user flipguy123.

Once you've finished these three lost sectors, your Journal of the Reef Cryptarch will update and you'll need to head west to the Outskirts of the EDZ. The fourth and final lost sector you need to complete, Whispered Falls, is located in the northwest corner of the Outskirts. Complete it and you'll receive a powerful gear drop. Your Journal will also update again, now reading "the trail has once again gone cold."

The final step of the Thunderlord quest line is now available. Talk to Amanda Holliday in the Tower to retrieve your decrypted coordinates. These will send you back to the Whispered Falls lost sector from the previous quest step. Set down at the Winding Cove landing zone in the EDZ and head northeast to find it.

Once you reach the end of the lost sector, activate the Fallen teleporter nearby and you'll be whisked away to - wait for it - the Cosmodrome zone from the original Destiny. Or at least a slice of it. Yes, it's exactly as players believed: Thunderlord is hidden away in a faithful recreation of Destiny's tutorial mission. Follow the baddies through the area until you encounter the Fallen ultra Kikliss, Murderer, who's hiding in the old den of Rixis, Devil Archon. Kill him to avenge Master Ives, and then follow Holliday's directions out of the Cosmodrome. But before you activate the return teleporter, poke around the wintry lot of rusty cars - you can scan one of them for another nostalgia trip.

Once you leave the Cosmodrome - for good this time - visit Holliday in the Tower to claim Ives' Last Engram. As you may have deduced, this decrypts into Thunderlord. Huzzah!

Oh, and if you were wondering, Thunderlord kicks ass.

If you really want, you can buy two skins for Thunderlord from the Eververse store. They're part of two small bundles which go for 700 Silver a pop. You can check the skins out below.