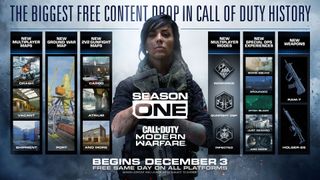 The Call of Duty: Modern Warfare season 1 release date and roadmap has been announced, arriving December 3 as a free update for PS4, PC, and Xbox One.

The full details of what's included can be found on the game's new blot post here.

Not all of this content will be arriving instantly for Call of Duty: Modern Warfare season 1, of course, but rolled out steadily over the course of the game's yet-to-be finalised roadmap. The season will also include a Fortnite-inspired battle pass system, a paid progression feature that allows players to access even more cosmetic items via 100 tiers of levelled content.

Unfortunately, there's no official word yet on when we can expect Modern Warfare's leaked battle royale mode, which dataminers discovered earlier this month, and is apparently set to launch sometime in the first few months of 2020.

Activision is staying quiet for now (perhaps it's too busy clamping down on those Tony Hawk and Crash Bandicoot leaks), but hopefully the wait won't be too long before we're basejumping into multiple fights to the death as Captain Price.