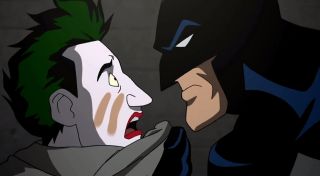 One of the best things to come out of Batman: The Killing Joke is the latest honest trailer from the Screen Junkies team. The feature-length movie from Warner Bros. animation division promised so much, but in the end delivered so little of what made Alan Moore and Brian Bolland's comic so special.

While there are a few fans who will defend it, overall the vast majority of die-hards were disappointed, including the Screen Junkies gang who have ripped it to shreds for your viewing pleasure. Check it out below...

It's not quite as bad as the absolute mauling they gave to Dawn of Justice, that's for sure. But they're not wrong with the flat-out shocking treatment of Barbara Gordon. In the comic, her assault is brutal and shocking yes, yet it adds to the twisted dynamic between Batman and the Joker. Here? We get two Bats banging on a rooftop. Wrong.