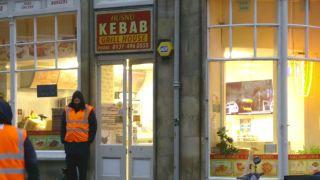 As we speak Avengers: Infinity War is filming in and around Edinburgh. From the looks of set dressing and locations it's actually using Scotland as a setting, not pretending to be somewhere else.

Obviously people live in Scotland and they have phones, so there's plenty of details leaking out. That shot in the header comes from this tweet suggesting at least part of the movie will involve a kebab shop.

They're filming tonight. This was before they closed the street - note the fake news on in the chip shop. #AvengersInfinityWar #Edinburgh pic.twitter.com/Q6NROuyYjIMarch 22, 2017

According to the BBC the shop has had a sign added saying "we will deep fry your kebab," just in case there was any doubt about the location.

This call sheet gives us some idea about the upcoming plans, with the Royal Mile  getting a lot of love as a location.

#AvengersInfinityWar Working title for avengers infinity war is "Marylou". Here is a part of the filming schedule in Edinburgh.😎 pic.twitter.com/NaMkFOqpgsMarch 20, 2017

Waverley Station is also featuring quite prominently with a massive green screen installed:

Judging by the Edinburgh set, Thanos will be getting his Infinity Gauntlet round a cup of pretend railway coffee in Infinity War. #avengers pic.twitter.com/c7v2ZsM6wnMarch 21, 2017

So far the only cast members spotted seem to be Paul Bettany's Vision, who might be on the wire in the station. Or his stunt double at least.

This video also shows Vision being yanked into the air as what are reported to be aliens attack.

#spoilers #avengers #filming #edinburgh #vision #attached but who comes in at the 🤔#stuntdoubles #infinitywar pic.twitter.com/t8skAXWCq4March 24, 2017

Fake padded cobbles were laid down for that scene, presumably to add padding for stunt work:

Another stunt double, possibly for Elizabeth Olsen/Scarlet Witch, has also been seen being yanked into an alley on a wire.

None of the main cast appear to have been seen in the area yet, so it's likely this is second unit stuff. Locals have been warned to expect some explosions over the next few days which sound like things are going to get a lot more interesting.

Directed by Anthony and Joe Russo, Avengers: Infinity War is due to arrive in UK cinemas on April 27, 2018 before opening in US theaters on May 4th, 2018.