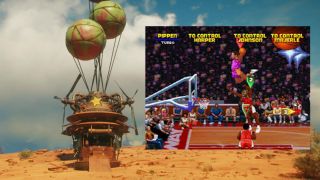 How to get Tim Kitzrow in Rage 2

In order to get Tim Kitzrow as part of the He's On Fire! cheat in Rage 2, you first need to locate the Wasteland Wizard, or Mangoo the Unborn to use his official title. This quirky chap can be found in a small hut with a series of balloons on top but from what we can tell, his location is unfortunately random.

We've found the Wasteland Wizard in two specific locations marked on the map below, but we can't guarantee he'll be there when you go because they're not the only two places he can spawn. When we discover more locations we'll update the map but for now, try these two places. If you can't find him, hop aboard your Icarus gyrocopter and soar through the skies until you spot him.

When you do find ol' Mangoo, you'll have to fork out $1,000 for the He's On Fire! cheat, which will allow you to enable Tim Kitzrow by navigating to the cheats menu inside the setting. Boomshakalaka!