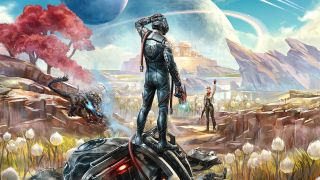 This deal on The Outer Worlds is a clear standout among the early Cyber Monday offers. Obsidian's epic sci-fi RPG is barely a month old, but you can get it on PS4 or Xbox One for just $34.99 over at Amazon.

The Outer Worlds Xbox One | $34.99 at Amazon (was $59.99)
To put this deal into perspective, a digital copy of The Outer Worlds was available for $39.99 during Black Friday week - and even that was a fantastic deal at the time. So yeah, this price is absolutely stellar.  View Deal

This is an amazing deal, not just because The Outer Worlds only came out on October 25, but because the game's well worth it at full price. As we said in our review:

"Obsidian's talent for sharp writing, choice-based narrative, and complex role-playing systems have coalesced together to create one of the strongest new IPs of the generation with The Outer Worlds. There's plenty of room for improvement when it comes to making combat as compelling and rewarding as the rest of the game but, nevertheless, The Outer Worlds absolutely delivers on its premise as an immersive, full-bodied RPG that successfully picks up the baton where Bethesda has been dropping it of late."

Cyber Monday game deals from across the web (UK)