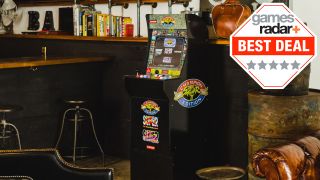 Well hello there, cheap Street Fighter arcade machine. Argos has given us a Valentine's Day gift by slashing the price of the Arcade1Up Street Fighter 2 Arcade Machine, bringing the overall cost down to £225 and saving you £75 in the process. Meanwhile, in the US, the Street Fighter Head 2 Head Table by Arcade1UP is still $100 less than normal via Walmart - it's now $399.99 instead of $500. You can check out both deals below.

Concerned about finding space for a hulking great Street Fighter arcade machine? Don't worry, the cabinet from Argos is only four feet tall.

Arcade1Up Street Fighter Head 2 Head Table | $399.99 at Walmart (save $100)
Get your hands on a discounted Street Fighter arcade machine in the US with this offer.View Deal

If you'd like another fond blast of nostalgia, be sure to check out our guide to the best retro consoles.

Want to hold off now that the next-gen consoles are on the way? That's understandable, especially because we now have a better idea about the PS5 price and Xbox Series X price - as we reported earlier, Sony is reportedly struggling to keep the PS5 retail price low.

While you're here, if you've been thinking of upgrading your home internet, why not take a look at our new price comparison guide to the best broadband deals?