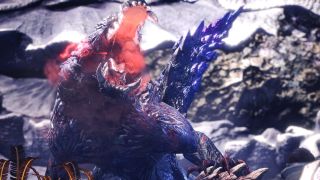 The Monster Hunter: World Ebony Odogaron is the dragon-powered cousin of the Odogaron from the original game. Not only does the Ebony Odogaron have access to the same attacks that the normal version has, but it can also spit out damage dragon-imbued clouds to sap your health and leave you struggling to orient yourself. It’s fast, strong, and incredibly angry.

While Ebony Odogaron may lack the overall bulk and size of Capcom’s other colossal Wyverns, it can still obliterate those who dare to underestimate its power. If you wish to avoid becoming this Fanged Wyvern’s chew toy, then make sure you follow our monster guide below to discover the tips and tricks you need to defeat this devilish dog.

Ebony Odogaron is frequently seen carrying its prey in its mouth and will consume it whenever it grows hungry. This Fanged Wyvern’s insatiable appetite forces it to constantly scour the land in search of food, often killing anything that it comes across. As a result, this subspecies is in a constantly powered up state. Unlike its World counterpart, Ebony Odogaron’s eyes glow blood red and its jaw produces a dragon-based emission that can inflict the hunter with Dragonblight.

While World’s Odogaron relied on its agility to deliver precise attacks, Ebony Odogaron opts for wide range hits that cover more ground and dish out even greater amounts of damage. Getting caught by any of Ebony Odogaron’s dragon-based moves will remove the elemental power on your weapon, severely reducing your damage output until the status effect is removed. Just like most ailments in Monster Hunter, Dragonblight can be cured by taking a Nulberry, so make sure you pack some before heading out. The added Dragonblight effect makes positioning even more important in this fight, especially when you’re trying to chase those quick kill times.

A lot of Ebony Odogaron’s attacks can be chained together and are delivered with incredible speeds, so learn the patterns and look for any small openings where you can weave in a few attacks. The sweeping ground attacks have very little animation downtime and can hit multiple times, forcing players to keep on their toes if they wish to survive. However, once exhausted, Ebony Odogaron’s frequency of attacks will greatly diminish, giving hunters the opportunity to break its head, claws, and tail for increased rewards. If you’re struggling to land hits with Monster Hunter’s slower, more cumbersome weapons, then try opting for weapons that will give you added mobility.