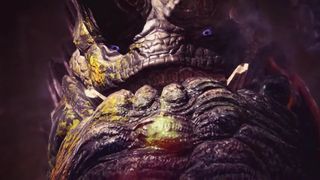 The Monster Hunter World: Iceborne Brachydios is an incredible mix of boxing and explosions that’ll give every hunter a reason to watch their step. It uses a slime that it secretes to cause massive explosions wherever it punches, and can also detonate the area around itself when it gets angry enough. It’s a fearsome Brute Wyvern that can duck and dodge your attacks as well as delivering a mean right hook.

It’s not uncommon for hunting parties to fall victim to Brachydios’ explosive moves, especially when you happen to get caught within the blast radius. Taking down this Brute Wyvern can seem like a rather daunting task, so if you’ve hit a wall and need a few tips for beating Iceborne’s Brachydios then make sure you follow our monster guide below to discover the tips and tricks to survive this explosive battle.

Brachydios is a highly-aggressive monster that uses its stumpy fists and deadly horns to deposit puddles of explosive slime. This slime sticks to hunters and will detonate if its not dealt with, often blowing them to smithereens and even killing those who are on low health. When enraged, Brachydios will become more aggressive and its fists, horn, and spinal ridge will begin to glow yellow and green. During this enraged state, Brachydios will no longer leave slime puddles. Instead, the Brute Wyvern uses its horn and fists to cause explosions on impact.

Brachydios’ blast-based attacks can make fighting this beast a real nightmare, especially when you happen to get caught in one of its many explosive moves. This Brute Wyvern can often be seen coating its fists in its own saliva, priming the explosive substance for a variety of explosive attacks. Just like Teostra, Brachydios’ moves inflict hunters with the Blastblight status effect. If you happen to get hit by Brachdyios’ fists, make sure you roll on the ground or remove the effect with deodorant before the slime explodes. Getting hit while Blastblight is active can often result in an instant kill, so it’s imperative that you take care of this ailment before it’s too late.

While Brachydios’ large pools of slime may seem intimidating at first, they do have a detonation time that is clearly signified by the substance’s change in colour (green, yellow, red). Don’t be afraid to go in for a few quick hits when Brachydios is depositing this explosive substance, but just make sure you get out of the slime’s area of effect when it glows red. These explosive pools can also be detonated early by Brachydios when it hits them with its fists or horn, so keep well away from any charged attacks and head slams. When enraged, Brachydios will no longer leave slime puddles, but instead create explosions on direct impact. Positioning is key during this phase as getting caught by even one of these blasts can have a devastating effect on your overall survival.

For example, one of Brachydios’ moves sees the Brute Wyvern slam its horn into the ground, sending waves of explosions towards a specific target and even unleashing them around itself. Be sure to dodge out of the way and wait for these explosions to die down before launching a deadly counterattack. Keeping to the side of Brachydios is often a good idea for those that don’t wish to face the beast’s fists head on, but just be mindful of its club-like tail, as this can sweep you off your feet if you’re not careful. Packing a water element weapon and plenty of traps is highly advised, especially if you’re looking to inflict as much damage as possible.