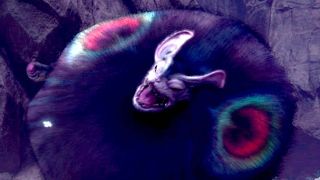 The Monster Hunter World: Iceborne Nightshade Paolumu is a happy-looking bat creature that is a variant of the Paolumu from World. This uses an incredibly potent sleeping gas to immobilise its prey and any predators, and it can be a huge pain to take care of if you’re not prepared for this flying Wyvern’s tricks.

While Nightshade Paolumu may not look as intimidating as the rest of Monster Hunter World: Iceborne's toothy terrors, it can still destroy those who dare to underestimate its power – in fact, Nightshade Paolumu can quickly decimate even the most experienced hunters if they happen to get caught napping. If you wish to avoid falling prey to this deadly sleep-inducing subspecies, then make sure you follow our monster guide below to discover the tips and tricks you need to defeat this ferocious Flying Wyvern.

The Nightshade Paolumu relies on its sleep spores to incapacitate its victims before moving in for the kill. When enraged, Nightshade Paolumu’s aerial attack will become more frequent and erratic in nature. Meanwhile, the dark colouring and garish patterns on its puffy thrill are used to intimidate its foes, giving it a more sinister vibe that distinguishes it from its cheerfully pink cousin.

Nightshade Paolumu favours aerial attacks over regular ground-based moves, so make sure you bring plenty of flashbugs and convert them into flash pods. After all, keeping Nightshade Paolumu on the ground will make it a lot easier to hit, especially if you’re using weapons with relatively low reach.  If you prefer to change your weapon instead, then the Insect Glaive or any of the long-range weapons are your best bet. If you do manage to down it, be sure to avoid knocking it into any nearby sleep particles as you won’t be able to hit it without succumbing to an unwanted slumber. It’s also important to remember that once Nightshade Paolumu has unleashed its sleep-inducing spores, it can move the gas around with its tail and wings, and even by inhaling while hovering above the ground. You’ll need to be aware of every pocket of sleep spores on the battlefield, otherwise you can be taken out by one as it's passing by. As a result, packing energy drinks is essential as you really don’t want to be caught dozing off when this beast comes flying towards you. The easiest thing to do here is to pack your equipment with sleep resisting decorations, as if you do so this fight will be significantly easier.

Just like regular Paolumu, the Nightshade subspecies can be toppled over if you apply enough damage to its legs, giving you plenty of opportunities to KO it once its been knocked down. Be wary of Nightshade Paolumu’s aerial dive bomb attacks as these deal a tremendous amount of damage and can leave you stunned, making you incredibly vulnerable to subsequent attacks. As well as making sure you’re using the right weapon for the job, bring along Fire or Water weapons to deal out the most damage. If you’re using a fiery Insect Glaive and have sleep resisting armour on then this fight will be a doddle.