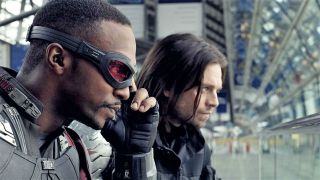 Falcon and the Winter Soldier, one of the big MCU TV shows arriving on the Disney+ streaming service, now has a release date courtesy of Marvel's SDCC panel.

Falcon and the Winter Soldier will be coming in Fall 2020. And that's pretty much all we know at this stage. Admittedly, not much was shown during the reveal, though a brief teaser played with a hint that Baron Zemo, who did so much to help drive a wedge between Earth's Mightiest Heroes in Civil War, would be the main villain.

With Steve Rogers having departed to get old with Peggy Carter at the end of Avengers: Endgame, he left his shield and the Captain America mantle with Sam “Falcon” Wilson (Anthony Mackie), so we’re guessing this will focus on Wilson’s struggles to follow in his predecessor’s footsteps, and Bucky “Winter Soldier” Barnes’ (Sebastian Stan) efforts to reintegrate with society.

During the panel, Mackie said that he "wants to know what makes Falcon tick... and ticked off." So, whereas one Cap was all about being respectful, this new breed of hero might not be messing around.

The announcement was made at San Diego Comic-Con, with Marvel head Kevin Feige confirming 10 new MCU movies are currently in development. They include  The Eternals, Shang-Chi and the Legend of the Ten Rings, Doctor Strange in the Multiverse of Madness, Thor: Love and Thunder and Blade. Read all about the Marvel SDCC panel here.