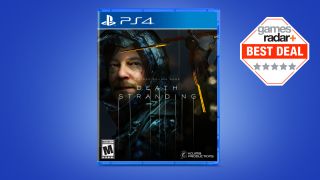 The Death Stranding price drops just keep coming lately. Not that you'll find us complaining! At the weekend we saw it drop to a record low $39 from a previous discount of $49, and Walmart decided to out-do itself, pushing back the competition again by further dropping the price to another all-time low price of just $35.

This is better than any PS4 game deal we saw on Black Friday and an excellent opportunity to check out the hype on one of the biggest games of the year. With so many additional discounts over the last week, you'd certainly be forgiven for thinking that we might see more, but you're cutting it close for delivery in time for Christmas by waiting any longer.

Hideo Kojima's PS4 exclusive has generally had favorable reviews citing the incredible graphics, compelling story and unique community vibe where a player's actions can help out fellow gamers who tread in their footsteps later on. Some have also found the core gameplay of delivering packages from A-B a bit on the dull side though. You can read more on this and the rest of the game in our own Death Stranding review.

Death Stranding: $35 at Walmart
That's the lowest price yet for Death Stranding and we don't see it getting any cheaper this year. Order soon and you should still be able to get it delivered in time for Christmas. This price promo is said to run until December 28 - if stocks last that long.
View Deal

At just $35 though, we reckon you should try the game for yourself and find out why people that are loving the game are digging it so much. They can't all be postal workers, right? On the plus side, with a price this low, stock surely won't last long, especially with other retailers still charging $60, so we reckon you'll be able to resell this and arguably even make a few extra dollars off it if you did it soonish. Or you'll fall in love with the Norman Reedus/Kojima union and keep it forever.

If you decide, to take the plunge, have a read of our Death Stranding tips so you can hit the ground running when the game is delivered. And if you're still shopping for more games, be sure to head on over to our roundup of the best PS4 games.

Death Stranding may well be one of the best-looking games ever made, but Microsoft has it in its sights with the newly-announced next-gen Xbox Series X console. You can bet Sony has a response planned soon with the upcoming PS5 too.