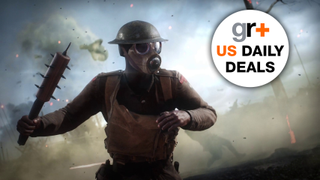 If you've been holding out for a 4K TV with HDR support for gaming, but really don't want to drop more than a grand, today is your day. There's also a bunch of great deals on console and PC gaming hardware, including a standard-price bundle with not one, not two, but four included games.

Check out the US gaming deals below and come back tomorrow for more limited-time discounts.

MSI 15.6" GE62VR Apache Pro-024 Gaming Laptop | Intel Core i7 6700HQ (2.60 GHz) | NVIDIA GeForce GTX 1060 | 12 GB Memory | 256 GB SSD | 1 TB HDD | Windows 10 Home 64-Bit | VR Ready now $1,299 at Newegg
If you're looking to break into PC gaming without assembling your own supercooled tower, this is a travel-friendly yet still powerful way to do it. Give that powerful graphics card a workout with the free included copy of Gears of War 4 and link up with your squadmates using the included gaming headset.