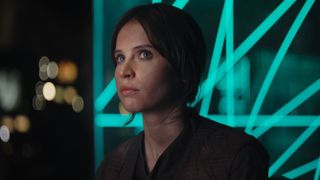 In case you hadn't heard, it's Force Friday! This annual merchandising event is typically when Lucasfilm releases loads of new Star Wars swag, causing fans everywhere to empty their bank accounts in pursuit of the perfect Vader Funko Pop. This year the main focus is - naturally - on Rogue One and the folks at Topps have released a bunch of new images showcasing the film's cast of characters. They're a mix of photos and sketches of the rebels. And yes, one of the franchise's iconic villains is thrown in to balance it out. Check 'em out below:

While there's no new introductions here, it's still exciting to see fresh looks at Jyn Erso and her gang. That portrait image, with the cast facing outwards, is a true throwback to old Star Wars one sheet posters. Stunning vistas, gorgeous colours, and ready to adorn your walls.

Aside from being rather lovely to look at, the images are also a tidy reminder that Gareth Edwards' spinoff opens really, really soon. In less than three months, actually. But it's not so soon that we won't see any new footage before it hits the big screen. Rumors of a third and final trailer started to waft onto the web this week - word is that Doctor Strange will come attached with a new preview for the film. Exciting stuff for Force fans. Hopefully the marketing team will keep some of the film's secrets under wraps...