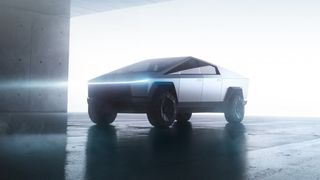 If you took one look at Elon Musk's Cybertruck and thought, "blumming heck, that looks like it's been ripped straight from a dystopian nightmare", you're not alone, it seems.

As spotted by our pals at PC Gamer, replying to the reveal tweet posted by Elon Musk earlier this week, the official Cyberpunk 2077 twitter account had something to say about the futuristic-looking new vehicle.

CD Projekt Red wouldn't add any more when pressed for comment, so for now, let's presume this is a tongue-in-cheek exchange and nothing more. But given we've seen Musk and his creations pop up in all manner of movies and shows, we suppose anything's possible. Watch this space, eh?

Don't forget, Johnny Silverhand is set to be a major player in the world of Cyberpunk 2077. After his breathtaking reveal at E3, we've steadily been learning more about the character's role. Cyberpunk story director Marcin Blancha described Silverhand as a "rocker boy" who is said to appear to you as a kind of malware implant who will offer you tips and advice throughout the game.

The current release date is still a little ways off on April 16, 2020, but it looks like we'll be in for a very Reeves-heavy Cyberpunk adventure. With recent news that Reeves will also be reprising his role as Neo in the Matrix 4, the future is bright – the future is Keanu.

If you missed the Golden Joystick Awards pre-show then you missed out, but you can still get a sneaky look inside the CD Projekt RED studio, where the team is currently still hard at work on Cyberpunk 2077. We get to see Marcin Przybylowicz, the composer music director, Paweł Sasko, the lead quest designer, and level designer Miles Tost hard at work on the futuristic RPG.

Looking ahead to all of the most exciting releases? Here's our list of the best new games 2019 and beyond.