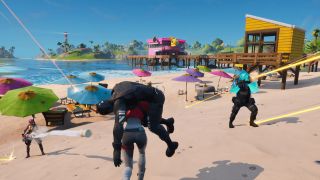 Fortnite Chapter 2 Season 2 won't be launching until the latter half of next month, according to new information from dataminers claiming to have discovered that another delay is in store for the next major content update to Epic's battle royale game.

The news comes from regular source of Fortnite info HYPEX, who says that the end date for Fornite Chapter 2 Season 2 has "been updated from February 6 to February 20" on the game's backend API, marking another two week extension for Season 1, which has been live since October 15 last year.

The Chapter 2, Season 1 ending date on the API has just been updated from February 6 to February 20..pic.twitter.com/v6xmgrmuI8January 23, 2020

The potential push back, which has yet to be confirmed by Epic Games itself, wouldn't be the first time the studio has extended the first season of Fortnite Chapter 2, having announced that it would be adding an extra 7 - 8 weeks to the competitive mode back in November 2019.

This makes Fortnite Chapter 2 season 2 the longest Fortnite season by a wide margin, now in its 100th day compared to the usual ten week average of each previous season.

Hopefully that means something big is in store for the free-to-play phenomenon, or that this potential leak turns out to be bogus, as fans are starting to get itchy for more content following a rocky start to Fortnite's second chapter. Fingers crossed.