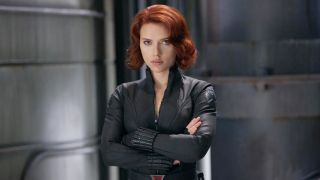 The Black Widow movie has been announced at San Diego Comic Con 2019. the movie has been filming in the UK for some time and is just one of a handful of new properties to arrive as part of Marvel Phase 4,.

Scarlett Johansson is back as the eponymous ass-kicking Avenger, having previously appeared as the character in multiple other MCU movies. She will be joined by Midsommar actress Florence Pugh as Yelena, a "sister figure" to Natasha Romanoff, Stranger Things acotor David Harbour (who will play the character Alexi), Rachel Weisz, and O-T Fagbenle. It was revealed that Black Widow will face off against the villain Taskmaster.

The Black Widow movie will be directed by Cate Shortland, and will debut in cinemas on May 1, 2020, the first of the Phase 4 movies.

Of course, there’s also the small matter of where it all fits into the timeline (and if you thought the Marvel timeline was confusing before, just you wait). Despite being a Marvel Phase 4 addition, the Black Widow movie will take place between Captain America: Civil War and Avengers: Infinity War.

"They've known each other for a while and there's a complex history there," Harbour told IGN. "This movie happens right after Captain America: CIvil War, and so those events do factor in."

The announcement was made at San Diego Comic-Con, with Marvel head Kevin Feige confirming another nine new MCU movies are currently in development. They include  The Eternals, Shang-Chi and the Legend of the Ten Rings, Doctor Strange in the Multiverse of Madness, Thor: Love and Thunder and Blade. Read all about the Marvel SDCC panel here.