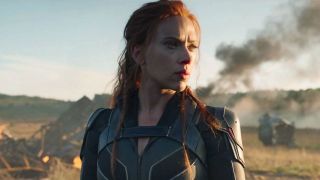 The Black Widow movie has finally decided to step out of the shadows. There are now two trailers to comb through for clues, as well as further details on the packed Black Widow cast, a poster, and even some story quotes on what we can expect from Natasha Romanoff's solo adventure.

While this probably is goodbye for Nat in the MCU, it's also the first stop on the long and winding road that makes up Marvel Phase 4. As such, you'll need to be primed and ready before that May 1 release date. With the likes of Thaddeus Ross showing up (as well as a big Iron Man rumour) and it taking place at a crucial juncture in the Marvel timeline, it's going to be just as important as anything that comes after. As so many have found out over the years, ignore Black Widow at your peril.

Less than a year to go now. The Black Widow movie release date is set for May 1, 2020. Announced as part of a heaving slate of upcoming Marvel Cinematic Universe entries at San Diego Comic-Con 2019 (SDCC 2019), the movie will kick off Marvel Phase 4.

Scarlett Johansson, inevitably, is back at Natasha Romanoff. After all, how could it be a Black Widow movie without her? But she isn’t coming alone.

Joining her in the Black Widow movie cast is Midsommar lead Florence Pugh as Yelena, another member of the Black Widow training program. Pugh describes her character as “like a sister” to Natasha, though, as we’ll soon discover, there’s plenty of bad blood between the two.

Rachel Weisz, meanwhile, is yet another new Black Widow on the block. She told IGN: “I’m a Black Widow… There’s quite a lot of other characters that you’ll meet who are also Black Widows.”

Perhaps the hottest commodity joining the cast is Stranger Things’ David Harbour. Here, though, he’s switching his police hat for a big-ass shield as he’ll be playing Alexi, otherwise known in the comics as the Red Guardian. As shown by the trailer, he even gets an ill-fitting suit to squeeze into and even throws hands at few masked enemies.

As for the main villain of the piece: the Taskmaster is in the movie. No word on casting yet, though it’s been revealed that Natasha will be facing off against the villain who recently made an (irritating) series of appearances in the Spider-Man PS4 game.

Elsewhere, Variety is reporting that British acting legend Ray Winstone has signed on to play an unnamed role in the movie, while THR says O.T. Fagbenle, of The Handmaid’s Tale fame, is also appearing in Black Widow.

More recently, however, there have been rumblings about two MCU actors who are making their presence felt as part of the Black Widow movie cast.

First up is a big one: Robert Downey Jr. Yup. Tony Stark may be returning less than a year after his supposed departure in Avengers: Endgame. There's a bit of a twist, though. Reports suggest his cameo will actually be ripped straight from a Captain America: Civil War unreleased deteled scene, showing Stark telling Nat to make a run for it. That also fits in nicely with the Black Widow timeline fitting snugly in-between Infinity War and Endgame.

More intriguing is the apparent inclusion of General Ross, who was last seen in Endgame but is best known for his antagonistic role in 2008's The Incredible Hulk. He was spotted on-set (via Just Jared), using a cane to help support himself, and his role in the movie was later confirmed by the trailer. Could he be setting up The Thunderbolts, the nefarious Marvel team-for-hire?

The first two Black Widow trailers are here! You can watch the first one above, but let's break down the essential takeaways, just in case you missed anything.

Taking place before Infinity War, Natasha returns to what looks like her 'family' of Black Widows, including Yelana, Rachel Weisz's unnamed character, and the father figure: David Harbour's Red Guardian. They look to be battling Taskmaster in one scene, though the key motif running through the Black Widow trailer is that Natasha will stop running away from her past. What she hopes to find when tracing the murky history of her formative years is anyone's guess, but at least this is one chapter she can finally close, especially after we know what's to come in Avengers: Endgame.

Nat also has a new look: a white suit. Upcoming Metal Gear Solid movie director Jordan Vogt-Roberts even likens it to The Boss' own get-up in Snake Eater.

Honest question.I’m firm believer of parallel thinking, but...Is there any BLACK WIDOW pre the release of METAL GEAR SOLID 3 in 2004 that establishes this white suit?It sure reminds me of a certain patriot who saved the world❗️Also, Cyber Monday Sale on elevated walkways! pic.twitter.com/NhOr0FaoeSDecember 3, 2019

There's also a really cool Easter egg tucked away in the Black Widow trailer. Yelena is wearing a jacket that her "sis" Nat would later go on to wear in Infinity War. Whether it's a tribute or just a keepsake, however, remains to be seen.

The second trailer, meanwhile, features a lot of the footage found in the first preview, but also includes a greater look at Taskmaster, the villain of the piece. The masked man (or woman, I'm looking at you Rachel Weisz) carries on the theme of copying the Avengers' fighting styles. In the first trailer, it was Hawkeye. Here, it's Cap and even Black Widow herself. But is the Taskmaster with or agains the new "wave of Widows" that have emerged?

Black Widow movie plot: is it a prequel?

First thing’s first: the Black Widow movie is a prequel. Yes, it had been rumoured for some time – including a rogue piece of product placement helping piece together the clues – but now it’s official thanks to David Harbour’s interview with IGN. He told the publication that it’s being set in the gap between Captain America: Civil War and Avengers: Infinity War on the Marvel timeline.

So, what can we expect from the Black Widow movie plot? Exact story details haven’t been revealed, with the trailer understandably not giving too much away. We can glean some story details, such as Nat working alongside previous Black Widows against a new thread led by Taskmaster, but that's about it so far. In terms of character details, we’ve got a few choice quotes about Natasha Romanoff’s arc in the movie.

Director Cate Shortland says that “[Black Widow] gets to put all the pieces of herself back together,” while Scarlett Johansson says she’s going to play “Natasha as a fully-realised woman… and I’m excited for fans to see the flawed side of her.”

As recently revealed in a THR profile of Johansson, the actress says that "The movie packs a big punch." She's also involved in tweaking the script in her role as executive producer, revealing that it makes her feel as if she's "in control of the destiny of this film, which gives me a lot more peace of mind."

The Black Widow movie poster has been revealed

BLACK WIDOW!!! Official D23 poster I had the honor of painting. She’s very near & dear to me since it’s the gazillionth time I’ve concept designed/painted her. What a cast & crew! #BlackWidow @MarvelStudios #ScarlettJohansson @Florence_Pugh @DavidKHarbour #RachelWeisz @DisneyD23 pic.twitter.com/fxMOI4fJ5RAugust 25, 2019

The very first Black Widow movie poster has been revealed. Post-D23, Marvel Studios' director of visual development, Andy Park, unveiled the artwork, showcasing a look not only at the titular agent, but also her supporting cast.

Fusing together the character's two characters black (of course) and red (still on her ledger, lest we forget), the Black Widow posters shows Natasha Romanoff clad in a slightly new suit to the one we're accustomed to seeing from her. The yellow trim and belt looks, if anything, a little too flamboyant for the punch first, ask questions later Black Widow.

There's also a look at the designs of David Harbour's Red Guardian, as well as showcasing Rachel Weisz's Black Widow character, plus Florence Pugh's Yelena. Take a look at it above in more detail.

Despite being officially revealed at SDCC, the Black Widow movie director has been known for a while. THR reported studio executives met with more than 70 potential directors for the flick, with Cate Shortland ultimately getting the big gig – the first woman to helm a Marvel movie solo, after Anna Boden directed Captain Marvel with Ryan Fleck.

Shortland made her name with a succession of short films in her homeland of Australia before the 2004 release of Somersault, her first feature. She’s best known for Lore, a 2012 historical drama where a Nazi family seek to evade Allied forces at the end of World War 2.

Meanwhile, Collider reports that the Black Widow movie writer is Ned Benson, most famous for his work on The Disappearance of Eleanor Rigby. The role originally went to Jac Schaeffer (The Hustle), but apparently Benson has been commissioned for a significant rewrite of Schaeffer’s script.