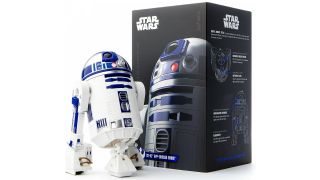 Let's be candid for one second; we've all wanted a little R2-D2 droid to call our own. He's basically your friendly neighbourhood robot butler, and nowhere near as annoying as C-3PO, so it's a win-win for any Star Wars fan.

While there are dozens of variants of R2-D2 toys out there, it's Sphero's high-quality remote control droid - as also featured in our guide to the best Amazon Easter sale 2018 deals - that stands out as one of the most attractive options, allowing you to intuitively control the droid with a bespoke app from your mobile phone.

We even recently tried the toy for ourselves in the latest episode of What's in the Box... though the first test run may have ended with poor old Artoo falling off the table. In any case, Amazon are currently offering Sphero's droid for almost half price as part of its Easter sale, bringing the RRP of £129.99 down to a very tempting asking fee of £69.99.

Sphero's R2-D2 offers precise, authentic movement which accurately replicates the droid's cinematic mannerisms, holographic simulations that let you immerse yourself in famous settings from the galaxy far, far away, and a smart AI system that can react to other Sphero toys and even to scenes from some of the Star Wars movies themselves. He's the perfect companion to watch The Last Jedi with, now that you've bought yourself the Blu-Ray.

The deal ends today, so you're going to have to be quick if you want to get on the offer before it runs out. Alternatively, if R2-D2 isn't your thing, why not check out our list of the best Star Wars merch on the market right now? I'm sure there'll be something that tickles your inner Rebel.