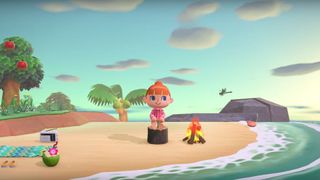 An Animal Crossing Switch game is well and truly on the way to bless our new year, and it'll take us away on a vacation to a customisable deserted island. The upcoming adventure Animal Crossing: New Horizons will let you create the island of your dreams by letting you design every aspect of its sandy shores. The Deserted Island Getaway Package looks like it's shaping up to be the perfect little holiday on Nintendo's console, and we can hardly wait to reunite with Tom Nook, Isabelle, and the rest of the lovable gang.

Sure, our island vacation is still a little while away, but we're inching ever closer and we're sure it'll be worth the wait. Thanks to some recent Nintendo Directs, we're steadily learning more and more about it. So while you wait for your departure in March, we've gathered together everything we know so far about Animal Crossing: New Horizons, so you prepare for your trip to the island (we'll be continuously updating it with anything new, so be sure to check back often):

Animal Crossing: New Horizons Switch release date - When is it coming out?

Nintendo has confirmed that the Animal Crossing Switch release date is set for March 20, 2020. That's quite the change from that 2019 original pencilling, but it looks like it's going to be worth the wait.

Every Animal Crossing: New Horizons trailer we've had so far

All the first teaser told us is that Tom Nook is back, and that Animal Crossing is coming to Nintendo Switch (originally in 2019), but it was enough to get us all super excited.

It's the start of a new year, and the thought of escaping away to a little Animal Crossing shaped deserted island is more appealing than ever. To welcome in 2020, Nintendo dropped an adorable short teaser trailer to remind us that new adventure truly is on the horizon now. Featuring Tom Nook giving a presentation to promote the Deserted Island Getaway Package, can see many familiar faces in the audience including Isabelle who makes an appearance being her adorable self. The teaser may be very short, but it does gives us our first look at the cover of the game.

All the Animal Crossing: New Horizons gameplay details we know so far

Set on a new deserted island, Animal Crossing: New Horizons will see you settling on a brand new world and working to build it out into a proper little civilisation.

"Players embark on an ultra-exclusive Nook Inc. Deserted Island Getaway Package and enjoy a peaceful existence full of creativity, charm and the freedom to roll up their sleeves and make their new life whatever they want it to be," reads the official Nintendo press release. "Players can collect resources they can craft into everything from creature comforts to handy tools as they set up a homestead they can decorate freely, both inside and out."

The focus with Animal Crossing: New Horizons is crafting. By collecting all the things you're used to in the Animal Crossing series, like wood (soft and hard), weeds, flowers, rocks and more, to craft things like furniture and tools. In the above trailer you craft a 'flimsy axe', which you can use to chop down trees. You can still buy items from Timmy nook's shop though, so there are plenty of options for you to obtain new things.

The recipes for crafting themselves are hidden away inside your brand new Nook phone, via an app. You'll be acquiring new recipes through other animals, or by discovering new items, or just directly buying them from the store. There's also a new Nook Miles programme, where you can activities earn you miles, meaning there's a much stronger sense of progression in the game.

You can also use the Nook phone to call an islander to come and help you out in your various tasks. Animal Crossing: New Islanders co-op confirmed! Up to four players can play together just by passing a Joy-Con, or via local wireless connection you can have up to eight players on a single island.

There's also an adorable new Camera app that works as a Photo Mode, with the ability to choose your expression to ensure you get the best shot.

In the September 4 Nintendo Direct, we got to see some new gameplay features coming to the deserted island. A shop set up by Tom Nook known as "Resident Services" sells tools and furniture and will also buy your unwanted items. But that's not all! As part of the "Island cleanup plan," you can sell any weeds you gather from the island to quite literally make a tidy profit.

Nook Miles were also revealed, which is a new feature coming to the world of Animal Crossing. You can earn Nook Miles by doing various activities and then exchange them for special items and recipes. Oh, and if you have a tasty snack, you can shovel up whole trees and plant them somewhere else. Handy trick, that.

Animal Crossing Switch wishlist - Everything we want to see

After the fantastic Legend of Zelda: Breath of the Wild and Super Mario Odyssey, Animal Crossing fans (ourselves very much included) are eager to see what Nintendo brings to the home of Isabelle, K.K. Slider, and the increasingly greedy Tom Nook. Here are a few things that we’d like to see in a new entry on Switch.

Decorating your humble little abode has always been at the core of quiet village living, but seeing the same sets of furniture has gotten tiring. Every game has included the same lovely, modern, and exotic furniture sets without adding a whole lot of new pieces. Even finding ways to mix and match them has worn out it’s welcome. There’s so much room for new sets and individual pieces, especially with the improved graphical capabilities. Nintendo could really expand and include more types of furniture giving players more opportunity for customization.

A more diverse cast of animals

It’s not called Animal Crossing for nothing. A big part of the franchise is interacting with the charming characters that occupy your little virtual slice of life. We’ve seen the cast of neighbors grow entry to entry, but things took a step back in New Leaf. Villagers lost a bit of charm they had in previous games, the variety of the interactions decreased and relationships became repetitive. A lot of this has to do with localization, New Leaf had localized Japanese text instead of full English dialogue like the earlier games. A lot of the conversations that weren’t completely kid-friendly got cut, and a lot of the charm got lost in translation. Even Rossetti, the reset-without-saving mole, got toned down for the 3DS entry.

The Switch version should give the characters more lines of dialogue, including some frustration and crankiness that adds a bit of spice to town. Combine this improvement with more species and ways to interact and then watch the new relationships blossom.

Each entry of Animal Crossing has continued to improve the series, including new features that expand on the original concept and quality of life improvements. But things can get much, much better. Features that we see in Pocket Camp and Nintendo’s other spinoff, Happy Home Designer, should get implemented into the main series.

Happy Home Designer never felt like a complete game, even though it introduced a lot of cool concepts that we hadn’t seen before. Bringing the furniture placement system and ability to place items outside the house to a main series title would make decorating each room easier and more enjoyable. Fishing, bug catching, fossil collecting, and fruit are all overdue for a makeover, and the Switch’s graphical capabilities could kick Animal Crossing’s visuals into the current generation. Adding more colorful detail to these elements would make every moment spent in game much more engaging and charming.

What would you love to see in Animal Crossing on the Switch? Let us know in the comments below.