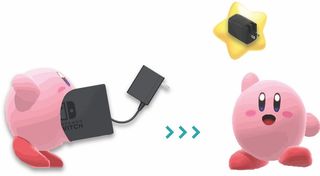 The standard Nintendo Switch dock is easily the most underwhelming part of the console. It's barebones and kind of clunky, but it's also hard to find a viable substitute dock due to power and data restrictions. Human Things, which you may know for its Genki brand of Switch accessories, is confident it has a solution to this problem: the Genki covert dock, which is small enough to fit in your pocket but purportedly powerful enough to stand in for your Switch dock if you want to connect the system to a TV while you're out and about.

This dock is currently on Kickstarter, and it's already very funded. With 36 days still left in its campaign, it's raised over quadruple its $50,000 goal - hell, it's raised $20,000 since I started writing this article. So yes, it's funded. If you pledge $49 or more, you'll get a dock early, while $59 will get you a dock and some universal power adapters. Note that slots for these pledges are limited to 1,500 people apiece - once they're full up, you'll have to pledge $59 for the dock and $69 for the adapter combo.

Basically, the Genki dock is a tiny wall charger with one HDMI Out port for your TV, one USB C power port for the Switch, and one USB 3 data port for accessories (one less than the normal Switch dock). To use the dock, you would plug it into a power outlet, connect your Switch using a USB cable, and plug your TV's HDMI cable into the thing as well. Bam, now you can play on your friend's TV or whatever. Maybe you can be like those Hip Youths in the Switch commercials and game out on a rooftop - except with a TV now.

In all fairness, it sounds like a nifty little device, but like all third-party Switch chargers it raises two questions: will it fry my Switch, and will it be rendered useless by future firmware updates? To Human Things' credit, the company did at least address these risks in the dock's Kickstarter.

"To maximize reliability, we made sure not to skimp on parts," the company said. "We've configured the Covert Dock to use only standard Switch charging profiles when used with the console and conform to PD standards for other USB-C devices. We've worked closely with experts in this field, including producers of the official Switch AC adapter, engineers of various docks in the market (including Insignia), and the developers behind reputable PD and GaN technologies (Navitas)."

The Switch is notoriously susceptible to shorting out when connected to improperly regulated or overly powerful chargers, so it's reassuring to hear that Human Things accounted for this. But what of future compatibility? The company says it's "made it possible to update the firmware so that we can maintain compatibility in the unlikely event that the Switch docking protocol changes through firmware updates and new hardware revisions."

The Genki Switch line is pretty good overall, and this does sound like a handy gizmo. But given the history of third-party docks and chargers, this is the kind of thing I'd want to see out in the wild before entrusting my Switch to one. Human Things says that if all goes well, the Genki covert dock will be delivered to backers - and presumably made available to buyers - this December.

Here are the best Nintendo Switch accessories for 2019.