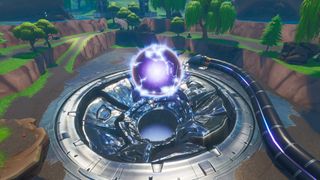 As Epic has started releasing daily Fortnite Season 10 teaser images, the map is starting to very slowly change in-game. It's almost confirmed that the theme for the next season of Fortnite will be time travel, with Epic posting things like "think back" and "twist time" to accompany the teasers. There's also an enormous ball emitting waves of particles on the map in the very middle of Loot Lake, and it's seemingly the reason for a subtle change.

Originally spotted by Reddit user /u/duskyxlops, if you take a look at the closest tree to the orb on the north side of the crater, you'll be able to see that it has turned an off-shade of yellow, rather than the luscious green colour all the other trees in the area have. With Dusty Depot being pictured in the first teaser image for Fortnite Season 10, the common theory is that parts of the map are going to revert to how they used to be in previous seasons. Trees around the northern parts of the map used to be much yellower, when Anarchy Acres was around, so this tree could be hinting at that. It's definitely an intended change too, because it only changes to be a yellow shade when a player has loaded the area, which is verifiable in replay mode.

In the past, Epic has tended to slowly roll out changes for the next season over the course of a few days. This is likely to be the start of something similar, which may see other parts of the map revert back to how they used to be, before the complete changes come into effect at the start of Season 10.

Nobody actually knows what Season 10 will entail exactly, but time travel is almost certain. Some people think the orb is going to float around in a manner similar to the Cube, changing some parts of the map to previous states, while others think the entire map will change and some parts will be futuristic alongside the older versions of locations. Keep your eyes peeled on the game though because with just two days to go until the new season kicks off, there's bound to be some more changes taking place soon.