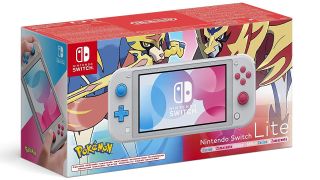 Getting a cheap Nintendo Switch deal is very much like seeing a unicorn: you don't. However, there are some pretty attractive deals appearing ahead of this year's Nintendo Switch Black Friday offerings. And this one is as good as any pre-Black Friday Switch deals we've seen so far (you could even say it's 'super effective'). You can get the Zacian and Zamazenta Edition Switch Lite console, a copy of Pokemon Sword or Shield, and an exclusive-to-Amazon sticker set for just £219. Sweet, right?

Given the fact that Nintendo games (and Nintendo everything, actually) hold their value extremely well, particularly when they're as new as Sword or Shield, this genuinely does save you money - about 30-35 quid by our reckoning. So, if you're wanting to avoid the madness of Black Friday and Cyber Monday, this is a great deal to go for to get that Nintendo and Pokemon goodness in your life.

Nintendo Switch Lite (Z&Z design) + Pokemon Sword + Sticker set | for just £219.99 at Amazon UK
This is a great deal for the latest iteration of Nintendo's console and the latest, greatest Pokemon game.View Deal

Nintendo Switch Lite (Z&Z design) + Pokemon Shield + Sticker set | just £219.99 at Amazon UK
Or you can go for the Shield version of the game if that's your bag and team it with that sweet and original version of the console.View Deal

Pokemon Sword and Shield have released to rave reviews, including ours. Both offer a brand-new way to catch 'em all; there's a massive new region to explore based on the UK, a new range of Pokemon to catch, and some shiny new mechanics which look to be a great shake-up for the series. In other words, there's a lot to get your teeth into here. Be it the open 'Wild Area' where Pokemon can be seen wandering freely, or the Pokemon Camp that enables you to interact with your favourite pocket monsters, this is Pokemon like we've never seen it before.

This is a deal which represents the tip of the iceberg (hopefully), and the upcoming Black Friday game deals will certainly feature some outstanding discounts.

If the Nintendo Switch Lite isn't quite your bag, then you can always check out our guide to getting the best Nintendo Switch bundle. Don't forget to hook it up to one of the best gaming TVs to get the best experience possible.