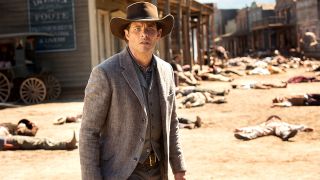 When it comes to keeping secrets, the Westworld season 2 cast could enlist for the National Security Agency. If you thought the first season hinged on audiences not knowing what was going on, everything we know about the second season - which isn't much - tells us that it's going to be even more important that viewers remain clueless when the show returns to our screens next month.

"You open the script and a little robot thing flies out and scans your eyes and your face and takes your hand and like... blueprints your hand!" Laughs James Marsden, when I quiz him about security.

He's clearly joking (I think) adding: "You get the scripts and they’re watermarked with your name on every page so if it gets out they can be like 'Oh, it was Marsden’s script that got leaked!' But you know, they’re very secretive."

Rodrigo Santoro goes into more details: "On set, we’re not allowed to have phones to use - we don’t anyway - but it’s a safe, secretive in that way." And when asked about the rumours that HBO has the Game of Thrones season 8 cast burn their scripts after reading, Shannon Woodard replies with: "Oh, well they email me mine with passwords so I’m not printing it!"

In fact, when Santoro first got a description for the show he only had three hours to read it! "Three hours and then poof! It disappears," he told me. "But not anymore. That was like the beginning, before it was even a pilot when we had the very first information." Thankfully, the cast have longer than that to learn their lines, but it isn't just about keeping the scripts off the internet.

Creators and showrunners Lisa Joy and Jonathan Nolan even go as far as to not tell the cast anything they don't need to know to do their jobs. "I do think there is a great amount of energy that’s gone into 'Hey, let’s only give out enough information that we need to the actors…'" says Marsden. “Someone asked me… ‘When did you know that Evan [Rachel Wood] was Wyatt?’ And I was like, when I read the tenth script… we had already shot nine episodes!”

Marsden doesn't mind staying clueless though: "I guess you have to surrender a certain amount of control when you’re getting to play in this world that they’re creating and go 'Hey, I’m not gonna need to know everything.' As long as I know what you want me to know, I’m fine with it. But yeah, we get told in a very friendly way to keep it close to the vest, we can’t go into specifics or details about season 2".

At least the pressure of keeping so many secrets hasn't got to the cast and they're still able to joke about it. "They actually have our loved ones locked in a room right now!" Newcomer Gustaf Skarsgård tells me with a jokey grin. At least... I'm pretty sure he's joking.

Westworld season 2 premieres on April 22 on HBO in the US and a day later on Sky Atlantic and NOW TV in the UK, and you can read about the 13 things we found out about the second season when we interviewed the cast here.