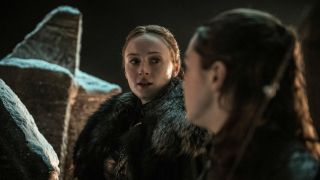 I know we’re desperate for Game of Thrones season 8 tidbits and gossip, but this might have been taken to a whole ‘nother level when it comes to the batch of new Game of Thrones season 8 episode 3 images just released. As you’ll soon see, they feature most of the key cast, including Dany, Jon, Arya, Sansa, and Tyrion, but also a previously-dead character, if you listen to one prevalent fan theory. Time to pop on those tin foil hats!

First up, the image everyone is talking about. Sansa looks to be in Winterfell’s crypt here as the battle presumably rages on outside. But that’s not what you should be focusing on. Look behind Sansa. See that face? Creepy as all hell, right? It could be worse. Some fans think it’s either Littlefinger or Catelyn Stark.

EW has new photos the next episode of GoT and WHO IS THIS BEHIND SANSA??? I’m not imagining that face am I?? pic.twitter.com/FULNQ0tDlLApril 25, 2019

The pattern on the curtain looks like someone's face lol. Like there's someone standing there and watching Sansa pic.twitter.com/wlfWGLQJHHApril 24, 2019

Me? I’m not totally convinced. Sansa’s sitting down and surrounded by what looks to be dresses of the women all packed together in the lower reaches of the Stark’s ancestral home. Among them is (probably) not Littlefinger but just a kid staring right down the lens of the camera. Still, being a Littlefinger truther might make the whole scene a lot more interesting.

Elsewhere, there’s Sansa again, this time meeting up with Arya. Gendry’s nowhere to be seen so I can only assume Sansa had him killed for fooling around with her younger sister.

Meanwhile, it’s chalk and cheese for two of the most beloved Game of Thrones characters. Brienne is leading the charge against the dead on the frontlines alongside Jamie while Tyrion is having a natter with Varys far away from all of the action.

Finally, Jon plays centre stage in the last two Game of Thrones season 8 images. In one, he’s looking pretty darn shocked about something hidden just out of sight – a resurrected ally turned White Walker, perhaps – and in the other he’s overlooking Winterfell with Dany.

The stage is set, the war is about to begin and, Littlefinger or no Littlefinger, Sansa isn’t the only one who’s going to be looking over her shoulder come Sunday.

Here are just some of the new TV shows you should keeping a beady eye on this year.