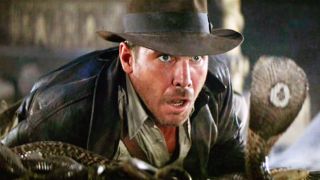 The untitled Indiana Jones movie coming in 2019 may not be a full-on reboot - it'll feature Harrison Ford, after all - but it will give the series a kick in the pants and get it moving again, according to Disney CEO Bob Iger.

In an interview with The Hollywood Reporter, Iger said that he's had discussions about where the franchise could go in the future. "We [got] Harrison Ford as Indiana Jones in the film. But then what's the direction?" he said. "I don't think it reaches the scale of the universe of Star Wars, but I see [us] making more. It won't be just a one-off."

Iger stumbled when trying to describe the upcoming film, calling it both a reboot and a continuation of the Indiana Jones canon. "It's not really a reboot, it's a boot — a reboot. I don't know," he said. If I may make a suggestion, Mr. Iger, maybe we could call it a "we're sorry for Kingdom of the Crystal Skull"?