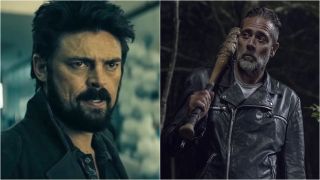 We may still be waiting on The Boys season 2, but show creator Eric Kripke has his head in the clouds and is thinking further afield. In a recent tweet, he’s not only apparently confirmed season 3 will be on the way, but also that Negan actor Jeffrey Dean Morgan could appear in the show’s third year.

“Thanks for spreading The Boys gospel,” Kripke said on Twitter, before offering up a role: “I’ll make you a deal. Season 3. I’ll write it, and if you’re [available], come shoot it!” Morgan’s response? “In a heartbeat.”

While nothing has been confirmed – and the actor’s Walking Dead shooting schedule may make things tricky – all signs are pointing to a reunion between Jeffrey Dean Morgan and Kripke, who created CW series Supernatural. If nothing else, just hearing ‘season 3’ will have fans hearts beating faster than A-Train midway through a Compound V session.

Billy Butcher and The Boys, meanwhile, will have plenty of new Supes and non-Supes in their sights in season 2. Patton Oswalt is joining the cast in a ‘secret role,’ while the first new superhero has been confirmed. Aya Cash is set to play the lightning-fuelled Stormfront.

Those looking at the more immediate future and hoping to get the first look at season 2 should start feverishly circling March 15 in their calendars. PaleyFest will be home to a preview for The Boys’ upcoming season and tickets are now available to buy.

Of course, no release date yet for The Boys season 3 – but all eight episodes of season 2 are set to air on Amazon Prime later in 2020.

Find out what else is coming this year with our look at all the biggest new TV shows.