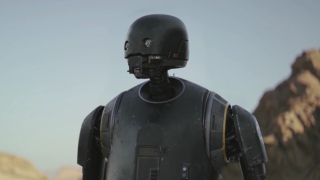 Think ‘Star Wars blooper’ and there’s a good chance that you’ll immediately think of that hapless Stormtrooper hitting his head in A New Hope. Continuing the tradition of mishaps in a galaxy far, far away, Star Wars: Rogue One had a K-2SO-related blooper that somehow made it into the final cut.

As reported by ComicBook.com, the scene in question involves Kaytoo ‘escorting’ Cassian and Jyn so they could get out of Jedha. When K-2SO is questioned by Imperial forces he really gets into role by smacking Cassian round the chops. The kicker? It was all improvised.

Diego Luna, who had no idea he was about to be smacked up by Alan Tudyk in all of his mo-cap glory, just about manages to stifle his laughter by putting his hand over his mouth. We see you laughing, Diego.

Why was it left in? My theory: Director Gareth Edwards just wanted to see Diego Luna get hit over and over again. And who can blame him?

Check out the full scene below.