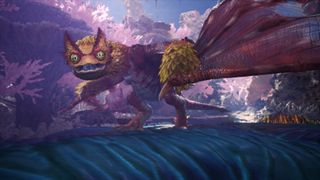 The Monster Hunter World: Iceborne Coral Pukei-Pukei is a variant monster of the original Pukei-Pukei. Unlike its cousin, this creature uses water it drains from massive plants to release deadly blasts of water from both its mouth and its tail. At least, it looks like a tail. It’s all kind of gross, but it’s also quite powerful if you’ve got the wrong set-up.

It’s not uncommon for Monster Hunter World: Iceborne hunting parties to fall victim to Coral Pukei-Pukei’s aquatic attacks, especially when you happen to get caught by one of its high pressurised water beams. Hunting this deadly Bird Wyvern can be a little tricky, so if you’ve hit a wall and need a few tips for beating Iceborne’s Coral Pukei-Pukei, then make sure you follow our monster guide below to discover the tips and tricks you need to claim a decisive victory.

Coral Pukei-Pukei is not only more vibrant than its World counterpart, it also has a bunch of fresh moves that revolve around water elemental attacks. When enraged, Coral Puekei-Puekei’s face, feet, and claws turn red and its movements become more erratic. This water-loving subspecies is able to store high concentrations of water in its tail by drinking from the gigantic plants that inhabit the Coral Highlands. Once it has guzzled enough water, it will begin to constantly barrage its foes with high powered water beams that inflict waterblight.

Coral Pukei-Pukei’s water-based attacks can make fighting this beast a real nightmare, especially when you happen to get caught by one of its many jet attacks. Just like Jyuratodus, Coral Pukei-Pukei’s moves inflict hunters with the waterblight ailment. If you get hit by this Wyvern’s high pressured water jets, then make sure you eat a Nulberry to instantly cure the reduced stamina recovery. Fighting Coral Pukei-Pukei with little stamina is a recipe for disaster, especially since you’ll be needing to constantly dodge and dive under its beam attacks. Of course, you can always use some gems to up your Blight resistance if you want to have the easiest time possible.

Once enraged, Coral Pukei-Pukei will take to the sky and perform a front flip while shooting a water beam from its tail. Try to keep well away from this move as it follows this up by hovering in the air and unleashing a 360 degree water beam that decimates anything that get caught within it. If you can’t get away from it then you can also avoid this attack by getting underneath it, though it takes a lot of skill and some crafty dodging to do so safely.

Once Coral Pukei-Pukei has used up the majority of its water reserves, it will locate and drink from one of the gigantic plants that inhabit the Coral Highlands. Coral Pukei-Pukei is incredibly vulnerable during this state, so be sure to unleash the bulk of your damage here. You’ll often have enough time to break any specific parts, laydown traps, and put down some barrel bombs to help shave off the amount of time needed to slay this deadly subspecies. If you’re tired of getting drenched by Coral Pukei-Pukei’s water beam attacks, then consider positioning yourself to the front of the monster as you’ll minimise the chances of getting hit by the high pressured jets from its tail. If you see it hunker down and open its mouth then you should try and get behind it as fast as possible, this signals a water beam from its mouth which it can split into two in order to hit a wide area. If you want to make the fight easier for yourself then bring a Thunder or Ice weapon to the fray.