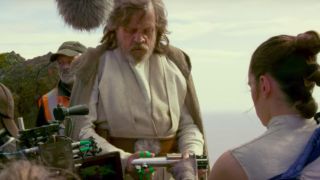 If you’re still recovering from the Star Wars Episode 9 shocker that Colin Trevorrow has left the project amid differences over “visions”, then hold on to your space seatbelt. A few very familiar names have been floating around in regards to who will be the new director of the final movie in the trilogy.

Ready? Not only is Rian Johnson squarely in the frame to helm a second Star Wars movie (after Star Wars: The Last Jedi), The Hollywood Reporter also believes that JJ Abrams is also on Lucasfilm’s mind when it comes to who will be sitting in the director’s chair come May 24, 2019.

It makes sense that Lucasfilm President Kathleen Kennedy would look to the past before deciding on Star Wars 9’s future. Star Wars: The Force Awakens was an obvious success and the buzz around Rian Johnson’s work so far speaks for itself. Plus, you know what you’re getting with those guys. No fuss, no muss.

Star Wars has had an ugly history in the past half-decade with directors leaving projects: first there was Josh Trank’s unnamed Boba Fett movie (seconds before he was due to announce it), the Han Solo movie firings of directors Chris Miller and Phil Lord and now Colin Trevorrow’s departure.

Fourth time lucky, am I right?

There’s still some good Star Wars 9 news (honest): Star Wars: The Last Jedi, as of writing, will have an extra Star Wars 9-related scene. Oh, and there’s the Star Wars episode 9 release date too – if it doesn’t get changed.