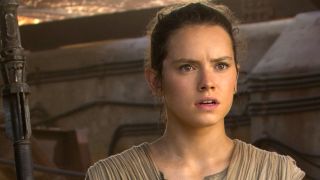 If you felt a great disturbance in the Force this morning, perhaps you saw this coming. Mere days after the Star Wars merch extravaganza of Force Friday 2, the official Star Wars site has released a statement that Lucasfilm has "mutually chosen to part ways" with Colin Trevorrow, who was slated to direct the as-yet-untitled Star Wars Episode 9. This is the second Star Wars director swap of the past six months, with the spin-off Han Solo movie losing the duo of Phil Lord and Chris Miller, who have since been replaced by Ron Howard.

It's always a bit troubling when a chosen director decides to leave a project, a bit like a new employee deciding they didn't actually jive with a company after they've been hired. With such a beloved series like Star Wars, even the slightest hitch can cast doubt on the production and have fans antsy as they wait to hear that the ship's been steadied. The official StarWars.com post says that "Colin has been a wonderful collaborator... but we have all come to the conclusion that our visions for the project differ," which could mean that his plans for how to end the legendary trilogy of trilogies wasn't to Lucasfilm's liking. It's only been a few months since Trevorrow was discussing the idea of ending the trilogy and getting "the most satisfying and emotionally resonant conclusion."

Granted, there's still a reasonable amount of time to find Trevorrow's replacement (two former Star Wars directors are reportedly in the mix), with Star Wars 9 set to debut in 2019 - but again, there's a lot on the line for the grand finale of a story that's unfolded over the course of over 40 real-world years, and an immense amount of pressure to get it absolutely perfect. While we anxiously await news on who Lucasfilm brings in as the closer, you can look forward to Treverrow's writing work on the dino DNA sequel Jurassic World: Fallen Kingdom next year. Thankfully, Rian Johnson has already long finished directing Star Wars: The Last Jedi, so there's at least some stability in the world of Star Wars fandom.