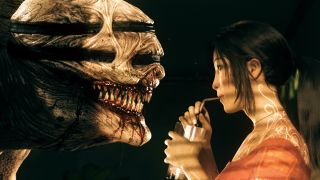 Video games get turned into movies all the time, television adaptations are a rarer beast. But that's exactly what we'll get thanks to Johnny Depp's production company Infinitum Nihil, which is working to bring Funcom's The Secret World to our TVs.

Never heard of The Secret World? Originally launched in 2012 as an MMORPG and re-launched in 2017 as a more streamlined action RPG, the game can basically be summed up as 'What if every myth, legend, and conspiracy theory were true?'

It features three secret organizations - the Templars, Illuminati, and The Dragon - all fighting to get Cthulhu-like monsters, Biblical plagues, and a whole lot more supernatural mumbo jumbo under control, and is known for its strong writing and fourth wall-breaking antics. Investigation-style quests frequently challenged players to use the internet (not a fictional, in-game version of the internet, but the actual world wide web) to look up a fictional town's history or research Bible passages and so on. Today's audiences are already obsessed with picking out every little detail in their favorite shows, so imagine all the conspiracy theories a show like this could inspire!

The TV version of The Secret World will be penned by James V. Hart (Sahara, Hook) and Jake Hart, with former CSI: NY producer Pam Veasey as showrunner. Johnny Depp will produce (Infinitum is his company after all) along with Christi Dembrowski, Sam Sarkar and Gudrun Giddings. No actors have been attached nor does it currently have a release window.

As for Infinitum Nihil, its track record isn't great, having produced such duds as Dark Shadows and The Lone Ranger. That said, it's also partly responsible for Hugo, which was a critical darling and was nominated for 11 Academy Awards. So if you're looking for a clear prediction on how well this new venture will turn out, maybe consult some tea leaves.