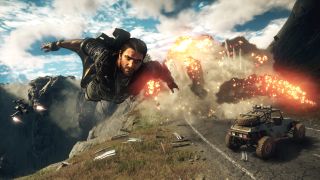 We are not worthy of the John Wick movies. Their impeccable bullet ballet, the choreographed fights that make our hearts swell... the franchise is a gift to any fan of action movies. As it happens, some time in the future we'll be getting a Just Cause movie, and now that the script is being penned by Derek Kolstad, the creator of John Wick, there's a very real possibility that Just Cause could be delivering the same Wick-esque thrills Keanu Reeves' suited assassins is famed for.

Don't expect the same level of glam, though: the Just Cause movie is probably going to be on a much bigger scale than John Wick, as the games are known for their high-octane explosions, ridiculous physics engine, and huge (often tropical) maps.

Although getting Kolstad to write the script is one hell of a catch for the minds behind the Just Cause movie, there's no word on whether Jason Momoa is still going to be playing Rico Rodriguez, which was announced two years ago in 2017. If he's still playing the lead role, the movie will follow Rico as he battles the Black Hand, a nefarious organisation that probably dresses its agents in black and has a dubious view of morality. Momoa does seem the perfect fit for Rico, though, as the ex-CIA agent is definitely going to need to be able to crack a few skulls and… well, you saw Momoa rip a guy's tongue out in Game of Thrones, right?

We'll keep our ear to the ground for more details about the Just Cause movie, but for now those two details - along with the fact that the Constantin Films company has the Just Cause movie rights - are the big things to bear in mind when you're trying to imagine what it might end up looking like. Jason Momoa + John Wick creator = glorious high-adrenaline action. Hopefully.

Eager for some more entertainment news? Bran’s actor originally thought his big Game of Thrones finale scene was fake, or look below to see our review of John Wick 3!