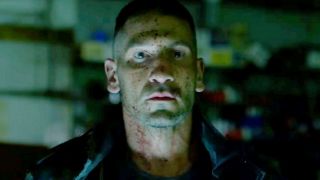 Set photos from Netflix's The Punisher have given us a good look at Frank Castle's new getup. And while Castle may have made his debut in Netflix's version of the MCU sans iconic skull vest, it looks like he's fully embraced the idea of branding.

I've gotta say, I preferred the slightly more subdued look Castle was sporting at the end of Daredevil season 2. While I find it a little incredulous that someone like Castle would have the artistic skill needed to produce the shading and contours of the skull in the first place, at least the first version didn't have fake bullet holes.

Did Frank look at his costume and think, "Yeah a giant skull is intimidating and all, plus I kill a lot of people, but I'm afraid I'm just not scary enough. Better add some bullet holes to this skull so people know I'm super hardcore."

At the end of the day though, this is a world of magic kung-fu men and high schoolers dressed up as spiders, so I realize my complaint is a minor one. The Punisher will debut on Netflix later this year.