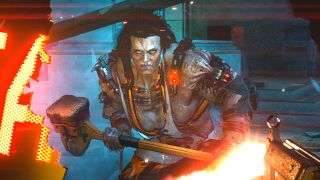 Cyberpunk 2077 boss fights will send you into battle with some of the most dangerous residents of Night City, and you'd better be prepared to deal with them. The official Cyberpunk 2077 Twitter account has shared a screenshot of the fight against Sasquatch, the brawny leader of the Animals gang. Though we've gotten a few extended looks at combat with rooms full of enemies before, this is the first time CD Projekt Red has shared an image of a full-on boss encounter outside of the private E3 2019 demo.

In the demo, main character V's fight against Cyberpunk 2077 character Sasquatch began as V raided the Animals looking for a special chip. V discovers they don't have the situation nearly as under control as they thought when Sasquatch Kool-Aide-Mans herself through an LED sign, starting the fight as you can see in the screenshot.

Minor boss fight spoiler warning, but V manages to take her down after destroying the "Juice" pack on her back, leaving Sasquatch weakened and unable to swing her massive sledgehammer. Also, that sign Sasquatch is bursting through probably used to say "LEAVE NOW" but it could also have displayed "LEAN HOW" or perhaps even "CLEAN MEOW". In the future signs could say almost anything.

CD Projekt Red has confirmed that you'll be able to do a full Cyberpunk 2077 no-kill run, which means there must be a different way of dealing with Sasquatch while progressing through the main story. Maybe you can talk your way out of the fight, or navigate diplomatically so you're never put in opposition with the Animals to begin with? Or maybe you just shoot her with a stun gun until she falls over unconscious instead of dead.

Find more lands to get lost in with our list of the best open-world games.