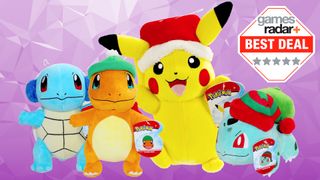 Is there anything that can warm a cold, cynical heart more than cheap Pokemon plush deals? The answer is no (or it should be, at least) especially when those deals involve the cutest soft toys with winter gear to keep them cosy throughout the holiday season. D'awww, just look at Charmander's little bobble hat! I can't cope. If you're in the UK, Nintendo themselves are offering an extra 20% off Pokemon plushes if you use the code 'PIKACHU'.

But let's talk about those holiday-themed Pokemon first. Hot off their cheap Funko deals yesterday, Walmart are offering a range of 'Wicked Cool Pokemon Holiday Plushes' (yes, we're baffled by the name as well) for a far-too-affordable-please-take-my-wallet-away-from-me $14.99 each. There are four different versions, too. You can pick up a Bulbasaur wearing an elf hat at a jaunty angle, Charmander in the aforementioned bobble hat, Squirtle with matching blue ear muffs, and Pikachu in a very fetching Santa hat. All of them look rather pleased with themselves, probably because they look dapper as hell and they know it. They're roughly 8" tall and super huggable, but they're also limited edition so won't hang around for long. Either way, they're cheap Pokemon plush deals. What more could you want?

As for the UK offers, you can get the normal Bulbasaur, Squirtle, and Pikachu with accompanying Poke Balls for a fair amount less than normal - they'll only set you back between £14.39-£18.39, making them ideal as presents for a loved one or yourself this Christmas. Just remember, you need to use the code PIKACHU at checkout.

Holiday Bulbasaur | $14.99 at Walmart
Elf hat Bulbasaur is something I never knew I wanted, but here we are. I'll take six.View Deal

Holiday Charmander | $14.99 at Walmart
This Charmander gives me visions of a cosy winter of mulled wine and log fires. In other words, it's perfect.View Deal

Holiday Squirtle | $14.99 at Walmart
Squirtle is also getting into the spirit of things with some cosy ear muffs over to keep out the cold.View Deal

My Friend Pikachu | £18.39 at Nintendo (save £8.60)
This particular Pikachu's cheeks glow, and his ears move. Use the code PIKACHU for that discount.View Deal

Squirtle + Dive Ball | £14.39 at Nintendo (save £8.60)
Squirtle is adorable enough as it is in soft toy form, but this one also has a Poke Ball with it (use code PIKACHU). View Deal

Bulbasaur + Poke Ball | £14.39 at Nintendo (save £8.60)
Bulbasaur is every bit as cute here as it is in the game. Get one for yourself with the code PIKACHU.View Deal

These are the tail-end of the Cyber Week game deals; there have been a ton of eye-catching discounts pretty much everywhere over the last few days. Although these are now starting to dry up, it's worth keeping an eye out for a bargain to get in time for the holidays.

Want something equally cute? Funko have just announced a new Baby Yoda Pop, and it's the perfect recreation of everyone's favorite space-frog rascal.