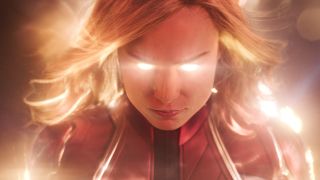 Disney is moving forward with Captain Marvel 2 after tapping WandaVision writer Megan McDonnell to pen the script. Disney is said to be hoping the Captain Marvel sequel hits the big screen in 2022.

Sources at THR say Anna Boden and Ryan Fleck, who helmed the first Captain Marvel, will not be involved with Captain Marvel 2, although they could stay in the MCU. We don't know who will step in to direct the project, but Marvel is reportedly looking for female filmmakers to head up the project. Captain Marvel was the MCU's first movie with a leading lady as the primary protagonist.

The second film in the Captain Marvel series will skip past the 1990s setting of the first film into the modern day. No other details about the cast, crew, or plot have been reported as of yet.

McDonnell is a freshman screenwriter with her only credit being the Disney+ series, WandaVision, which is expected to premiere some time in 2020. WandaVision joins a laundry list of new shows available to Disney+ subscribers now or in the near future.

Captain Marvel was an undisputed commercial success when it released last March, generating over $1.1 billion at the box office worldwide. With that figure in mind, it's no surprise to see Disney moving forward rather quickly with a sequel, which could release just three years after its predecessor.

Captain Marvel 2 is just one of many exciting new movies and TV series coming as part of Marvel Phase 4, joining the likes of 2020's Black Widow movie and 2021's Spider-Man 3.