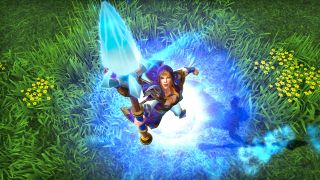 Though Warcraft 3: Reforged had a rough start, Activision Blizzard plans to release several more remastered games and remakes this year.

The parent company of both Activision Publishing and Blizzard Entertainment hosted a conference call with investors and analysts yesterday. The bulk of the call was dedicated to discussing the company's recent financial performance, but Activision Blizzard executives also shared a few details about the company's lineup of upcoming games.

Dennis Durkin, chief financial officer and president of Emerging Business at Activision Blizzard, first brought up Warcraft 3 Reforged as well as the upcoming World of Warcraft Shadowlands expansion, with nods to Hearthstone, Overwatch, and upcoming "regional testing" for the mobile-exclusive Diablo Immortal. Durkin also mentioned that King of Candy Crush fame has several "promising new titles" in the works, one of which is probably the Crash Bandicoot Mobile game that recently leaked.

"In addition, our business units will continue to tap into our portfolio of beloved IP to bring several remastered and reimagined experiences to our players in 2020, which we will announce closer to launch," Durkin said.

Maybe announcing that a bunch of remakes are on the way right after WarCraft 3 Reforged made a lot of people upset wasn't the best timing, but hopefully these ones go over better. Now the question is what older titles will be returning, and how. A Black Ops remake is a popular fan request, and everybody loves Diablo 2, but don't forget that this company also has everything from Tony Hawk's Pro Skater to Pitfall to Vigilante 8 in its back catalog.

According to Durkin, we should anticipate multiple remakes being announced and released this year. E3 2020 is only four months away…

Continue your journey into the history of games with our guide to the best retro game consoles.