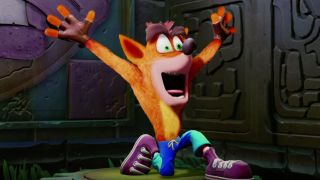 Crash Bandicoot is getting a mobile spinoff according to Facebook ads that have outed the game ahead of an official announcement. The game’s title is not yet confirmed although a leaked survey referred to it as “Crash Bandicoot Mobile” and the screenshots reveal it’s certainly no remake of the original.

The Crash mobile game looks to be an endless runner and was first spotted by Twitter users @jumpbuttoncb and @motwera who said they first saw ads pop up for the game on a Brazilian Facebook page associated with the game. It appears players could briefly pre-register to play the game when it arrives, but the page has since been removed. The endless runner comes from King, the company behind Candy Crush.

The game’s now-removed description on Storemaven revealed some gameplay features that go beyond a typical endless runner. It referred to a base-building component where players unlock buildings, build an arsenal of weapons, repair a spaceship, and even grow and harvest crops - all things that could have timers and multiple currencies attached to them. The description also says players can “team up with Coco to save the universe,” though it’s not yet confirmed if that means she’s a playable character.

We can safely assume this isn’t all Activision has in store for the IP after two great remakes have brought the orange goofball back into our lives. We've reached out to Activision to confirm if the leak is legitimate and will update this story if we hear back from them.

Learn more about the history of one of the series’ best games, Crash Team Racing, right here.