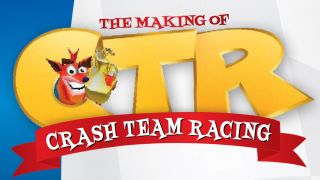 Arguably, the PlayStation didn’t need a mascot, but Californian-based developer Naughty Dog viewed the system’s initial lack of a digital frontman as an opportunity, and by late 1998, the company's massively successful Crash Bandicoot character had become the PlayStation’s answer to Sonic and Mario. However, designer Daniel Arey remembers the third Crash platformer draining his team's batteries and prompting them to seek a fresh challenge.

This feature first appeared in Retro Gamer magazine. If you want in-depth features on classic video games delivered straight to your doorstop (or your inbox), then you really should subscribe to Retro Gamer.

"We had done three Crash games," Arey begins, "and Crash Warped had been a really, really intense nine-month project. We were in meetings as Warped was finishing up, thinking about what our next project was going to be. And we came to this idea that we didn’t want to do a fourth Crash, because the team had done so much of that. We wanted to do something fresh, but we loved the universe and we loved the characters. And, of course, Sony was pushing for one more Crash. For Sony, Crash had basically become its de facto mascot."

So in order to square this circle, Dan and his team pitched the first fully-3D Crash title in the form of a kart racer they called Crash Team Racing – or CTR for short. "The Warped camera system was sort of locked in place and it had a precalculated number of polygons. But we thought we were getting to a point where we could actually do something 3D that didn’t require precalculations, so you could move the camera around a lot more latterly. We had all these 3D art assets, we had a rich set of characters and a rich universe. We had so many cool locations that could make the perfect racing universe. We were also playing lots of Mario Kart. So we were like: ‘Can we do this? It might be a little different, a change of pace for the team.'"

After gaining approval for CTR, the team – with one exception – applied the finishing touches to Crash Bandicoot: Warped before taking a well-earned rest. "We always released our Christmas release, took a month off, and then started something fresh," Dan recalls. "That was how it would work. But Danny Chan began development of the CTR engine while we were still in production of Warped; we then took a month off and started the full production of CTR. As soon as we came back, we were immediately planning on what kind of racing mechanics we were going to use."

The first mechanic to emerge from the team’s planning was a 'powerslide' inspired by a drifting technique popularised in the East, which as Dan notes was tested out on blocky makeshift competitors. "One of the things Naughty Dog always believed in was rapid prototyping. The idea was you couldn’t find the fun of the game in the abstract, and you certainly couldn’t figure out what was fun after you spent 17 months making it look pretty. You had to get it up fast, play it in a rough form and iterate as quick as you could. So we brought stuff together in block form very quickly. The first thing we wanted to do was get a mechanic up. We wanted to figure out our own version of a ‘slide’ mechanic. The powerslide was in homage to the power drift mechanics in Japanese racing; we wanted to have a flavour to how the joystick worked around corners."

Further planning followed, including discussions on where the courses for CTR were going to be set. "We had so many interesting locations that we had already put together," Dan reflects, "so we could call from all the different levels from the previous Crash games. We knew we were going to do a lot of the Egypt locations and all the island theme stuff, and we were going to experiment with some new themes."

As well as themes, of course, CTR’s tracks needed structure and features, the responsibility for which fell primarily to Dan and his codesigner Evan Wells. "Every single course we approached the same way you might approach a platformer level – there were main pathways and secrets everywhere," Dan explains. "There were secret shortcuts where you could jump, and 'hang time' became part of that. Hang time was this idea where you got as much airtime as you could to get the biggest boost possible when you landed. That was, I think, my proudest achievement. So those became the themes of every level: where could you get the big jumps, where could you get the shortcuts? We would sit down and lay this stuff down on paper. Then we would have artists come in the room and they would add their ideas, and we would all work together in little pods for each of the levels."

Beyond core level design, the team enhanced CTR's courses with set-pieces to compliment each track’s theme, such as a skater’s dream of a half-pipe in the game's sewer stage. "We didn’t actually think the half-pipe was going to work," Dan concedes. "There were a lot of issues with collision, with the way the camera rotated, and a lot of challenges to the half-pipe mechanics. But once we got the hang time thing going, it made sense that it almost felt like skateboarding. We wanted that feeling of jumping off a half-pipe and landing for the turbo-boost, and getting the super-boost on the second one."

In keeping with kart racing tradition, CTR's tracks were subsequently scattered with power-ups, including an array of weapons that provided Dan and his team with a tricky balancing act. "It was really difficult, because some players were just naturally skilled. And when you added the missiles, and you added different mechanics on top of them, you had to very careful. So we played around with regulation speed and the probability of what came out of the crates, and I think we came to a pretty good balance."

In contrast to other kart racers, CTR’s vehicles were being built for manoeuvrability. "Control was part of our DNA," Dan reasons. "Everything had to be responsive, because if you didn’t feel like you were in control then you blamed the game as opposed to blaming yourself. So the player could die a lot and still forgive us."

How has Beenox handled the ambitious remake of a karting classic? Read the Crash Team Racing Nitro Fueled review from GamesRadar to find out.

Additional concessions to fair gameplay followed, including an ingenious piece of adaptive difficulty that gave CTR both realism and humour. "We wanted a living world; the fact that the characters shot at each other made it feel like there were other real players," Dan observes. "If the player was lagging then the front characters would shoot at each other more causing them to crash more, which gave the player more of a chance. The game adapted to you, so it was better for skilled players, but a little bit kinder to players who needed a bit of help. Also, it was really a joyous moment to watch one character shoot another! There was an explosion, the smoke, the flying and the bouncing. And it was just fun to have them bouncing and you trying to avoid them; it was all part of the interaction."

CTR included an 'Adventure' mode, which the Crash team were building around a narrative-driven sequences of races. "It was a lot of extra work," Dan admits, "but we had these great characters, this great world, and we just felt compelled to tell some kind of story with it. It was bolted on a bit, but it was fun, and it allowed players to have some progression and some sense of continued play."

As the Crash team's deadline approached, however, certain features had to be cut in order to keep CTR on schedule, and so plans for making antagonists Nitros Oxide and Komodo Moe playable were dropped, and Crash’s pets Polar and Pura became solo drivers rather than sharing a kart. "We loved Nitros, but there was only so much we could do," Dan points put. "We had to make decisions, and that’s all it was. It was simply based on schedule and resources. I think Nitros, particularly, would have made sense. But in the end, these were just choices we had to make."

Instrumental to the decisions made during CTR's development were an army of playtesters, which the team relied on for input throughout their racer’s development. "We playtested the heck out of it!" Dan enthuses. "You know, continued adjustment. We would do testing on-site at Sony. We would videotape players and questionnaire them, and we would also watch them behind glass."

The reward for all of the hard work that the team had put into CTR came in the form of glowing reviews and a warm reception from players following the game’s release. "We considered it a great success," Dan beams. "I know a lot of people loved the Battle mode. I mean, that's all I needed to hear! You know, the whole idea of people playing four players and laughing and groaning and screaming. That was the magic sauce of the game to me; it kept the game going long after the Adventure mode was over."

When asked to reassess Crash Team Racing with the benefit of hindsight, Dan highlights his pride for the game’s skateboarding-inspired aspects and offers little in the way of alterations. "I’m still extremely proud of the game. It felt like we had achieved all the goals we had set out to achieve in a rich universe. It had pretty interesting mechanics, I still am very proud of hang time. I think the hang time mechanic was wildly innovative, and I had a personal say in that. What I would change are little incremental things, it would be little AI changes and the balance. There are a couple of levels that I think we could have worked on, even better shortcuts, but I think, generally speaking, that it's a product of its time. And at its time it did what it was supposed to do; it was fun, and it was exactly what everybody wanted from a Crash game."

This feature first appeared in Retro Gamer issue 176. For more excellent features, like the one you've just read, don't forget to subscribe to the print or digital edition at MyFavouriteMagazines.