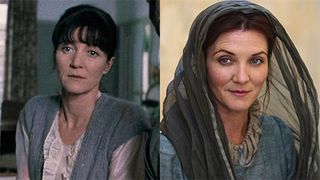 Harry Potter and Game of Thrones both have huge fan bases, so is it really that surprising that there’s a lot of crossover between actors? Harry Potter himself recently said he'd love nothing more than to appear on Thrones, and while there’s no word yet on whether this will actually happen, it’s comforting to know that if Daniel Radcliffe did pop up in Westeros, he’d find himself surrounded by familiar faces. In fact, there’s no fewer than 14 actors who have had parts in both the Harry Potter movies and Game of Thrones. Do you know them all?

Harry Potter: Award-winning actor Jim Broadbent played potions Professor Horace Slughorn in both Harry Potter and the Half-Blood Prince and Harry Potter and the Deathly Hallows – Part 2. Persuaded to come out of retirement and return to Hogwarts, Broadbent's Slughorn proves instrumental in the fight against Voldemort when Harry retrieves a buried memory from his past.

Game of Thrones: Having secured Broadbent's services for season 7, the Game of Thrones showrunners are playing details of his character very close to their chests and will only say that the part is “significant”. The smart money appears to be on Maester Marwyn, a venerable priest-like figure who would potentially intersect with both Samwell and Daenerys, if the series continues to follow the books.

Harry Potter: Character actor David Bradley played cantankerous caretaker Argus Filch in seven of the eight Harry Potter movies, skipping only Harry Potter and the Deathly Hallows – Part 1. Usually to be found skulking around Hogwarts’ corridors, the character is best known for his devotion to his cat, Mrs Norris.

Game of Thrones: Bradley played tyrannical Lord Walder Frey, a recurring character in the first, third, and sixth seasons of Game of Thrones. Instrumental in the betrayal and slaughter of House Stark at the Red Wedding, Frey was eventually murdered – to the cheers of fans everywhere – by Arya Stark at the end of season 6.

Harry Potter: British actress and musician Natalia Tena played Auror Nymphadora Tonks (“Don't call me Nymphadora”), who married Defence Against the Dark Arts teacher Remus Lupin (David Thewlis). She appeared in four of the Harry Potter movies (Order of the Phoenix, Half-Blood Prince, and both parts of Deathly Hallows) and became a fan favourite, despite having very few lines.

Game of Thrones: Tena played Osha, the wildling woman-turned-scullery maid who helps Bran and Rickon escape after Theon Greyjoy captures Winterfell in season 2. She's eventually captured and killed by grade A bastard Ramsay Bolton, towards the end of season 6.

Harry Potter: Best known for playing Finchy on The Office, actor Ralph Ineson appeared as Death Eater Amycus Carrow in the final three Potter movies. He's not given all that much to do, other than stand around and look menacing, as most of his lines from the book are given to Helena Bonham Carter’s Bellatrix Lestrange.

Game of Thrones: Ineson appeared in five episodes of season two, playing Ironborn raider Dagmer Cleftjaw, an ally of Theon Greyjoy during his capture of Winterfell. He's briefly name-checked in season 3, where we learn he's been flayed alive by Ramsay Bolton, along with the rest of his men.

Game of Thrones: Hinds had a much more significant role in Game of Thrones, playing King Beyond the Wall Mance Rayder in seasons 3, 4, and 5. Defeated in battle by Stannis Baratheon, Mance has one of the series' most disturbing death scenes (and on this show, that's saying something) when he's burned alive after refusing to kneel to his captor.

Harry Potter: English actor Freddie Stroma appeared in the final three Harry Potter films as obnoxious Gryffindor student Cormac McLaggen, who has a long-standing rivalry with Harry, possibly owing to his crush on Hermione. His most notable moment involves throwing up on Snape's shoes after Harry tricks him into believing he has eaten dragon testicles.

Game of Thrones: So far, Stroma has only appeared in one episode of Game of Thrones, but given that he's playing Dickon, the younger brother of Samwell Tarly, it's highly likely he'll be popping up again in season 7.

Harry Potter: Michelle Fairley made a brief but memorable appearance in Harry Potter and the Deathly Hallows – Part 1, where she played Hermione's mother, Mrs Granger. In an emotional moment, Hermione casts a False Memory Charm on both her parents, in order to protect them from being used against her by the Death Eaters.

Game of Thrones: A year after her Potter appearance, Fairley was cast in Game of Thrones as Catelyn Stark, the Lady of Winterfell. She played the role for three seasons before being famously Red Wedding-ed, with her death still standing as one of the show's most shocking moments to date. Though the character was resurrected in the books, the show hasn't dropped any hints in that direction and it seems likely she won't be back.

Matthew Turner is a freelance film journalist and lifelong Marvel Comics fan. His favourite film is Vertigo and he hasn't missed an episode of EastEnders since 1998.