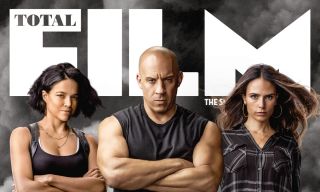 Fast & Furious 9 had the most-viewed trailer in the 2020 Super Bowl promo-extravaganza, outpacing all of its big-screen competitors. Given that Fasts 7 and 8 both grossed more than £1bn each at the worldwide box-office, Fast 9 is all but assured to be one of the biggest films of the year.

It’s rare a thing for a franchise to still have this much gas in the tank nine films in (10, if you include last year’s spin-off Hobbs & Shaw). F9 looks set to be upping the ante further, not only in terms of the outrageous vehicular mayhem, but also in the OTT plot twists. First up, John Cena has been revealed to be playing Dom Toretto’s brother, Jakob. Secondly, Han is back, seemingly from the grave. Justice is going to be served…

On shelves from February 7, the new issue also features an exclusive interview with A Quiet Place Part II writer/director John Krasinski, an in-depth feature on Calm with Horses, the sensational indie debut you need to know about, and we consider the future of Star Wars on the small screen. Read on for more about the new issue.

The Fast films have always had family at their heart, but the series is stepping up a gear in Fast & Furious 9 by putting Dominic Toretto head to head with his most dangerous adversary to date: his own brother. Total Film speaks to Vin Diesel, John Cena and director Justin Lin about outer space, #JusticeForHan and fraternal fireworks.

Read more: Vin Diesel fights with his family in these exclusive new Fast and Furious 9 images

Toxic masculinity. Violent acts. Gangster servitude… Ireland-set Calm with Horses may be a small independent film crafted by homegrown talent but it’s a movie with all the swagger, verve and impact of a classic crime-thriller. Total Film gets the craic on a must-see debut.

The Skywalker saga may have ended on a divisive note, but Star Wars lives on. As Disney+ brings The Mandalorian to the UK, could the key to the franchise’s future lie on the small screen?

On set of Downhill

An avalanche causes more than just panic in Downhill, as Will Ferrell and Julia Louis-Dreyfus put marriage under the microscope in this remake of sly Swedish comedy-drama Force Majeure. Total Film joins them on the slopes to find out more.

Since making his name as Jim in The Office, he’s built on his nice-guy image to become a creative multi-hyphenate, action hero and Hollywood star. As he releases his latest directorial effort, A Quiet Place II, the self-deprecating John Krasinski tells Total Film that they key to his success is being a key player, and knowing ‘how the sausage is made’…

Read more: A Quiet Place Part II trailer breakdown: 5 questions we have about the horror sequel

Total Film’s Buff section adds to its history of the decades with the 2010s, when crossover was cool and one studio ruled them all.

Read more: The 100 best movies of the decade

In the front section, Total Film has a new look at Peter Berg’s Netflix movie, Spenser Confidential, starring Winston Duke and Mark Wahlberg. Plus, No Time To Die, The Secret Garden, Rocks, Tim Robbins and much more.

Read more: Rami Malek’s Bond villain is on the hunt in this exclusive No Time To Die image

And if you’re a subscriber, you’ll already have the magazine waiting for you on your doormat, with this exclusive subscribers-only cover:

Do you want to get every issue of Total Film delivered to your door before it hits newsstands? We’re currently running a subscription offer where you can subscribe for as little as £10.25 for three months, and you’ll also get a die cast metal 1:100 replica of the Hogwarts Express from Harry Potter, created by iconic British brand Corgi. Head to My Favourite Magazines now to take advantage of the offer. (Ts and Cs apply.)

Subscribe to Total Film magazine now and you’ll never miss an issue (as well as saving money on the cover price). Get the digital version for your tablet or have an exclusive subs cover through your door every month - or save even more with a print/digital bundle! Grab your first issue FREE direct from Apple Newsstand. Or read our Android version on Google Play.