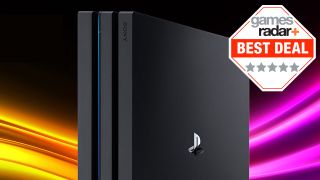 Update: we've just added a batch of fresh Xbox One X bundles below too. They're easily the best offers we've seen this year.

We do love a President's day discount, especially when it gets us a cheap PS4 deal - or a cheap Xbox One, for that matter. To honor the holiday, eBay has slashed the price of many consoles (by over $100, in some cases). One of the best deals would have to be a 1TB PS4 Pro for just $284.99. Because it normally goes for $400, that's a huge saving and tremendous value for money. Equally, the Xbox One X with Star Wars Jedi: Fallen Order is still $349.99 at Best Buy. That's a reduction of $150 from the list-price.

Yes, we know that the PS5 and Xbox Series X are on the horizon. But if you want access to 4K gaming now and/or want to catch up with all the incredible games its predecessor has to offer, this cheap PS4 Pro deal and cheap Xbox One X sale is an absolute bargain. We haven't seen them drop to those prices in a while, so they're likely to get snapped up fast.

Want something even cheaper? The PS4 Slim with God of War, Horizon Zero Dawn Complete Edition, The Last of Us Remastered, and three months of PS Plus has crashed down to $234.99 on eBay. And don't forget, these Xbox and PS4 deals are on brand new units too.

Xbox One X 1TB + Star Wars Jedi: Fallen Order + second wireless controller | $349 at Microsoft.com (save $209.99)
You can get your hands on a 4K-ready console with one of the best games of 2019 for far less with this deal.View Deal

Xbox One X 1TB Gears 5 bundle + second wireless controller | $349 at Microsoft.com (save $209.99)
Grab the world's most powerful console and some of its best games at a markedly lower price. A bargain.View Deal

Xbox One X 1TB + NBA 2K20 + second wireless controller | $349 at Microsoft.com (save $209.99)
A superb offer for any sports fan wanting to pick up the world's most powerful console for less.View Deal

Xbox One X 1TB + Forza Horizon 4 Lego Speed + second wireless controller | $349 at Microsoft.com (save $209.99)
This bundle is ideal for younger gamers, particularly with that extra controller for split-screen multiplayer.View Deal

Xbox One X (1TB) + Star Wars Jedi: Fallen Order | $349.99 at Best Buy (save $150)
The latest Star Wars game is excellent. It plays great and it looks fantastic. So getting it with an Xbox One X is a great deal to show it off in its best light.
View Deal

If you were more interested in the Nintendo Switch, we should probably point out that there is an eBay offer on a console for $279.99 instead of $300, but it's a refurbished unit so we probably wouldn't recommend taking the plunge. Our page of the best Nintendo Switch bundles will get you all the latest offers on brand-new machines instead.

For more offers, don't miss our guide to the best PS4 Pro deals and the best Xbox One X deals.