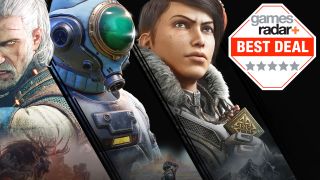 Look out folks, CD Keys is back at it with a cheap Xbox Game Pass Ultimate deal in the US and the UK - not to mention a standard Game Pass offer that gets you 72% off. To kick things off, they've discounted the 6-month Ultimate membership by an eye-catching 60% for new subscribers, bringing the overall cost down to $32.09 / £23.99. Considering the fact that it would normally set you back $80 / £60, that's cracking value for money. Not got Xbox Game Pass yet? Now's the time to invest (again, bear in mind that "this product only works with NEW Xbox Live accounts and will NOT work with existing accounts"). Meanwhile, those not fussed about getting the Ultimate version can grab a 3-month Game Pass sub for Xbox One at only $9.09 / £6.79 (it works for users old and new, too). That's a saving of 72%. Which is outright insanity.

Wondering what makes the cheap Xbox Game Pass Ultimate deal different? It includes the Xbox One and PC versions of the service, not to mention Xbox Live Gold. That means you'll be able to download games on either platform, including Gears 5, The Outer Worlds, and Wolfenstein: Youngblood (which has only just arrived on the service) all while playing online with your friends. Just remember, this reduction is for new subscribers only.

Don't worry about being left out if you're an existing Ultimate user, though - there's another Xbox Game Pass deal that still saves you around 47%.

3-month Xbox Game Pass Ultimate (existing users) | $22.79/£15.99 at CDKey (save over 40%)
If you already have Game Pass, this offer nets you 3 more months at almost half price. That's an absolute steal, and it's available for everyone - not just new members.View Deal

If you're not too sure how the service works, trust us when we say it's well worth investing in. Xbox Game Pass is a bit like Netflix for gaming, allowing you to download from a massive library of games that's added to each month. And these aren't old titles you won't want to look at; some of the latest and greatest games make an appearance alongside classics from the Xbox and Xbox 360 eras. For example, all Xbox One exclusives land on Game Pass as soon as they're released. If you're a fan of Halo or Gears, that means you can get the latest instalment the moment it appears.

For further reductions, don't miss these Xbox Live deals and our guide to the best Xbox One accessories.