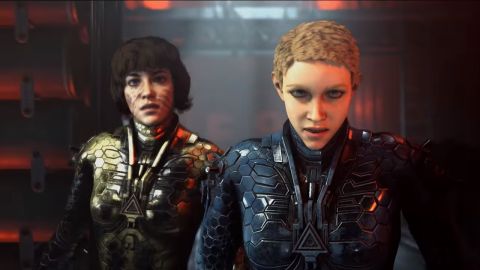 Wolfenstein: Youngblood is a spin-off with big ambitions let down by lacklustre execution.

Wolfenstein: Youngblood is aggressively inoffensive. This is a standalone spin-off with little to say, outside of casually reminding you that the Third Reich was bad, actually, as it hands you an assault rifle and pushes you out into the streets of Paris occupied by entrenched Nazi rule. Once there, Wolfenstein: Youngblood resembles something of an expressionless exercise in diminishing returns – the strength of its opening hours diluted by a structure that betrays the core appeal and strengths of the Wolfenstein games that have come before it.

Wolfenstein: Youngblood lacks the brash obsession with forward momentum that made its predecessors so endlessly captivating. It's an adventure that sacrifices any semblance of nuance in favour of an open-ended design that its action and content can barely stretch across. It's a game that fails so spectacularly to replicate the subtlety in storytelling that made B.J. Blazkowicz's endeavors through alternate history such a strangely intoxicating exploration of friendships and family at the end of the world. Wolfenstein: Youngblood isn't a bad game per se, but it is one that let its broader ambitions get the better of it.

That isn't to say that the development teams shouldn't be commended for at least trying to expand the scope of Wolfenstein. If ever there is an opportunity to try and infuse an established franchise with new blood, a budget-priced standalone is surely the place to do it. The problem here being that the somewhat inflexible mechanics and systems that have come to define the modern Wolfenstein games feel like they are at odds with the infusion of new ideas – not to mention the need to make a little content last a long time. It all comes together to make Youngblood feel like a flawed experiment more than an outright disaster.

That may sound like damning praise, but it's there all the same because there is enjoyment to be had with Youngblood – so long as you have a friend along with you for the ride. Spending 15-hours aggressively gorging card-carrying members of the Third Reich with an array of increasingly audacious weaponry is a good time. Because how could it not be, right? But to say that Youngblood makes up for its misgivings because of this online-only co-operative support would belie the point. Play with a stranger or switch it up to solo play (where an infrequently incompetent AI will take control of one of the Blazkowicz siblings), and you'll begin to crave company and conversation to help distract you from the mundanity born out of the repetitive mission design and open-ended approach to progression. The truth is, everything in life is made all the better by having a friend by your side, and that is especially true when you're tasked with killin' Nazis.

Youngblood is the result of a collaboration between Arkane Studios Lyon, the team responsible for engineering the action-RPG series Dishonored, and MachineGames, the studio entrusted with overseeing the premier Nazi-slaying simulator on the market since 2014. In the way that Youngblood handles – with respect to the weight of the weapons and the degree of control you can exhibit over movement and navigation – the expertise of MachineGames and Arkane is clear to see. Youngblood is a fantastic feeling shooter, the sort of game you'd expect to see come out of two masters of the first-person domain. From the second that you experience its cycle of frenetic action feed through your fingertips, you'll want more of it. You'll need more of it. Sadly, that feeling only fades with time.

Much of the ire can be directed at Youngblood's structure. Tasked with liberating Paris from Nazi occupation, you are given the freedom to touch down in any of three districts from the outset – with a fourth opening up in the late-game – to begin chipping away at the defenses of 'Brother' security towers or to complete a variety of odd-jobs for the French resistance that is hunkered down in the catacombs beneath the capital. Of all of these missions – between those on the critical path, the multi-staged objectives contained to each of the 'Brothers' towers – to the litany of side missions and daily quests to be completed in the districts themselves, there isn't a single standout. That, given the chaos routinely born out of Wolfenstein: The New Order, Wolfenstein: The Old Blood, and Wolfenstein: The New Colossus, is something of a surprise disappointment.

Plant a car bomb to kill the high-ranking Nazi officer off-screen, shoot at 10 fire extinguishers to help slow the Third Reich's ability to put out fires across the city, rescue a handful of civilians that you'll never see again, kill the fascist in the towering mech suit to get a little bit of XP and exposition dished out over a tape recording. The Wolfenstein games are about killing wave after wave of Nazis while exercising as much brutality and hostility as you can muster, and the simplicity behind that ideal has never been as thinly veiled as it is here in Youngblood.

Thankfully, these districts are at least thoughtfully designed despite being largely devoid of points of interest. The environments are breathtaking to behold, full of secret routes and plenty of verticality to give you an opportunity to take a varied approach to the objective at hand. In the early hours, the scale and visual depth of these environments imply that Youngblood threatens (at least to a small degree) to offer the flexibility and nonlinearity that the Dishonored games are so famous for delivering, although that isn't necessarily the case.

This is all to say then, that for all of the precariously placed balconies and walkways, the claustrophobic underground caverns and unoccupied apartments strewn across the Parisian districts in the interest of offering flexibility, there isn't all that much opportunity to experiment as the world may initially suggest you'll have. Regardless of what approach you take to an objective, the interaction will ultimately come back around to you whipping out the largest weapon in your arsenal and blasting it until your foe is reduced to red mist.

Stealth in previous Wolfenstein games was always positioned as an optional endeavour, designed to let you thin the ranks a little before engaging in conflict across confined spaces. In Youngblood, stealth is difficult to maintain for more than a few takedowns; enemies are tasked with covering a lot of ground due to the openness of the spaces, and it doesn't take long for a corpse to be discovered and the alarm to be raised.

In fact, the enemies are pretty damned perceptive outside of combat, but once engaged in it themselves they can swing wildly from deadly to dullards. Deadly in that enemies now come with their very own health bar and assigned level, meaning they are prone to standing still and soaking up bullets; dullards in that they are as likely to become entranced by something off in the distance as much as they are the two Terror Billy twins literally eviscerating anything standing with an honest-to-god laser cannon. The addition of light RPG systems to help level-gate progression through the core missions – not to mention keeping you at scale as you sink resources-earned into new abilities and weapon upgrades – stifles the pace of Wolfenstein severely. I don't know about you, but if I get cut down by a Nazi I want it to be because I timed a reload of my shotgun poorly – you know, the one with the screen dwarfing drum-mag and revolving barrels – not because the Gestapo officer has a level 20 floating above his head and me, the super-soldier encased in a metal exoskeleton suit, but a lowly level 15.

With a friend, Youngblood is a fun but unfocused adventure. The gunplay, movement, and spatial navigation is a true delight, which makes Wolfenstein a game that largely enjoyable in the moment, but not necessarily worth any real reflection. Played alone, cracks quickly begin to appear in Youngblood's structure, with the game losing its sense of momentum in the process. Youngblood doesn't offer the same variety in its mission or level design as Wolfenstein: The New Order, and it certainly doesn't match the ridiculous chaos born out of Wolfenstein 2: The New Colossus' story, and what you're left with is a standalone spin-off that plays nice with others but can quickly become an exercise in frustration.

Reviewed on Xbox One X.

Wolfenstein: Youngblood is a spin-off with big ambitions let down by lacklustre execution.