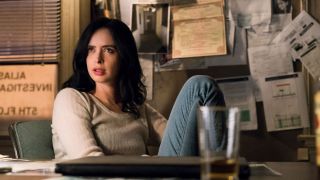 By now you’ve probably seen the news that Netflix has cancelled The Punisher and Jessica Jones, effectively putting an end to the long-standing relationship between the streaming platform and Marvel Entertainment which started way back in 2015 with the debut of Daredevil. It’s disappointing news for those of you among us that grew to love this little corner of the MCU, though not hugely surprising given that Daredevil, Luke Cage, and Iron Fist have all been canceled in the last four months.

Marvel’s head of television Jeph Loeb responded to the news today in an open letter, thanking fans for their continued support over the years while taking the time to celebrate an accomplishment in entertainment that many didn’t believe was possible. “It had never been done before. Four separate television series, each with different super-talented showrunners, writers, directors, cast and crew, coming out months apart and then they would meet in a single event series all set in the heart of New York City,” Loeb recapped, adding, "We called them The Defenders."

Loeb is keen to pull attention onto the "dazzling list of actors, writers, directors, and musicians who graced us with the very best of their craft", who came together to "write, produce, direct, edit, and score 13 seasons and 161 one-hour episodes" in the last four years. It’s certainly impressive and, when Loeb claims that "they said it couldn’t be done", he isn’t kidding.

Still, the work speaks for itself. In spite of some rough patches – we’re looking squarely at you Iron Fist season 1 and The Defenders limited series – the seasons have been fairly consistent. Hell, the surprise success of The Punisher shows just how well Marvel and Netflix’s partnership could work when the right creatives were put together.

For fans that are disappointed, Loeb is quick to put blame on Netflix for the cancellation, stating that "On behalf of everyone at Marvel Television, we couldn't be more proud or more grateful to our audience. Our Network partner may have decided they no longer want to continue telling the tales of these great characters…" while offering just a tease towards what the company might be planning as it looks towards the launch of Disney+, “ but you know Marvel better than that. As Matthew Murdock's Dad once said, "The measure of a man is not how he gets knocked to the mat, it's how he gets back up."

This reaffirmation that it was in fact Netflix’s decision to axe these shows echoes a comment Loeb made to Decider last week. "In the Netflix situations, that was a situation where the network made a decision and we had nothing to say about it," he said, going on to explain how this situation differed from the one regarding the end of Legion and FX.

If you still don’t believe me when I tell you that it was Netflix that put an end to these characters (I do see what you’re saying on Twitter, you know) perhaps this statement from Daredevil actor Amy Rutberg to Inverse should clear up any confusion. "My contacts at Marvel were very surprised," Rutberg says. "Any of the rumors that it was a Marvel decision are wrong, I think it was purely a Netflix decision. That comes from personal conversations with people high up at Marvel. They were surprised."

Netflix has confirmed that Jessica Jones will be given the opportunity to wrap up, with its third and final season expected to aim sometime later this year. If you’re looking for something to watch right now, then I feel inclined to push you in the direction of The Punisher season 2.

It isn’t yet known what Marvel will look to bring to Disney’s new streaming service when it launches in 2019 or whether any of these characters will be added to any of the new Marvel movies, but one thing is for certain – we won’t be seeing any of these heroes for hire on a screen of any size for a long while. Still, it’s as Loeb says in the sign off of his open letter, this is all “To be continued...!"

Looking for something new to obsess over? Then why not check out the best shows on Netflix.