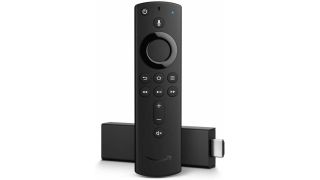 If you've seen the best Black Friday TV deals and just can't pull the trigger, the next best thing is to turn your not-so-smart TV into a smart TV with the Amazon Fire TV Stick 4K, currently $25 at Amazon. That's an irresistible 50% off MSRP and much, much more wallet-friendly than splurging on a brand new TV set.

If you aren't familiar with the non-descript plastic stick, here's the down-low: it plugs into your TV's HDMI port and lets you stream Netflix, YouTube, Hulu, Amazon Prime Video, Disney Plus, Apple TV, HBO, and other streaming services from your non-smart TV. This one lets you stream in 4K and includes the handy Alexa voice assistant and Alexa Voice Remote.

Even if you've already got a smart TV at home, for $25 the Fire TV Stick is worth grabbing for the convenience factor alone. Netflix binge sessions are even more cathartic when all you have to do to find your next movie or TV show is say, "Alexa, find anime," or, "Alexa, find dark horror comedies with strong female leads."

Now's as good a time as ever to start streaming your favorite movies and TV shows, as we just uncovered a monstrous Black Friday Hulu deal. Special for the season, Hulu can now be had for a ridiculously attractive $1.99 per month ($24 per year), compared to the usual $5.99 a month. Combine your new Fire TV Stick with Hulu and its cheapest price all year, and you have a whole new entertainment setup for less than $30 up-front.

Amazon Fire TV Stick 4K with Alexa Voice Remote | $25 at Amazon, was $50
Amazon's Fire TV Stick conveniently transforms your old and outdated TV to a bonafide Netflix-streaming champion. For a limited time, make your dumb TV smart for half the usual sticker price at just $25.

If you're an Apple-loyalist, be sure to keep up with the best Apple TV Black Friday deals to save a bundle on your next Apple-friendly TV upgrade.