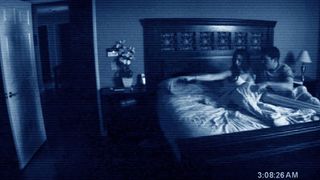 Blumhouse and Paramount Pictures are making another Paranormal Activity movie. We've seen the series go from the dark hallways of one lonely Southern California house to another with more jump scares than you can count.

Plot details are still under wraps after Paramount's Jim Gianopulos announced the untitled project on Wednesday in Barcelona. We don't know where this chapter in the series will take us, but it's likely that it'll be some sort of continuation on the previous movies.

Paranormal Activity: The Ghost Dimension, which dropped in 2015, is the most recent movie in the series. It follows a family of three as a demon haunts their every move. It also left quite a hefty cliffhanger at the end, although I won't spoil that if you haven't seen it.

The series started in 2007 and has seen almost $900 million in box office revenue worldwide. An impressive feat for a series  that hasn't even spent $30 million on the budget for six individual pictures. That revenue adds up to more than thirty times the series overall budget.

It's a bit odd that we haven't seen a new entry in the series since 2015. Each movie is incredibly cheap to make and have continued to draw a big profit. Perhaps Blumhouse wanted to avoid franchise fatigue. Either way, they're jumping back in now.

Blumhouse also has another Purge movie on the way in 2020.

Looking for more horror in the meantime? Check out our review of Child's Play to see how the new version holds up.